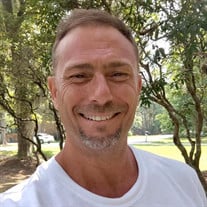 Funeral services for Peter Christopher Lewis will be 2:00 p.m. Thursday, April 7, 2022, at the Alva Wesleyan Church with Pastor Paul Kirk officiating. Interment will be in the Alva Municipal Cemetery under the direction of Marshall Funeral Home of Alva. There will be a visitation with the family present from 5:00 to 7:00 p.m. Wednesday evening, April 6th. Peter Christopher Lewis was born October 5, 1968 in Eugene, Oregon, and left his final mark on this world April 1st, 2022, in Alva, Oklahoma, at the age of 53 years, 5 months, and 27 days. He was the son of the late William B. Lewis and Verneda (Tavey) Wagner-Lewis. Many of his childhood memories were made in Lubbock, Texas before moving to Alva. He attended Alva Public Schools and later attended Northwest Vo-Tech where he received a certificate in Auto Body. In 2019, he attended Northeast Technology Center in Afton, OK, where he obtained his Marine Repair Certification. Pete was a jack of all trades which led him into many careers. He spent most of his years in the oilfield, but also had his own painting business. His love for the lake is what led him to become a boat mechanic. Pete ended his career with the City of Alva sanitation department where he kept the morale up with his never ending sense of humor. Pete was a member of the Town and Country Christian Church, but recently started attending the Alva Wesleyan Church. Through Pete’s many trials and tribulations, his love and passion for God never wavered. He enjoyed several hobbies which included hunting, riding motorcycles, boating, and camping. Above all, his favorite pastime was sitting on the banks of a pond, with a fishing pole in hand, watching God’s amazing sunsets. There are not enough words to describe who Pete was. He always had an infectious smile and a contagious laugh. Pete will always be remembered for his humor, and his joyful, giving nature. He never met a stranger and would give anyone the shirt off of his back. His youthful exuberance always managed to keep his family and friends on their toes. Pete’s zest for life is something that will always be remembered. May his free spirit be an example to all of us, to never take life for granted. He was preceded in death by his grandparents, mother and father, and was joyfully reunited in heaven with his son Kramer Lewis. Pete is survived by the mother of his children, Tonja Lewis of Alva; daughters, Kamaree Hatfield and husband, Christopher, of Homer, Louisiana and Kerstie Lewis and fiancé, Aaron Diefenbach, of Alva; three precious grandchildren, Torin, Jackson, and Asher, his significant other, Sandy Lee and her children whom he loved as his own; siblings, Jane Lewis, William Lewis, Joe Lewis, and Matt Lewis; cousin, Richard Irurita whom was like his little brother; his mother-in-law, Doris Marcus of Alva; many other relatives and a plethora of friends. Memorial contributions may be made through the funeral home to help defray the funeral expenses.

Funeral services for Peter Christopher Lewis will be 2:00 p.m. Thursday, April 7, 2022, at the Alva Wesleyan Church with Pastor Paul Kirk officiating. Interment will be in the Alva Municipal Cemetery under the direction of Marshall Funeral... View Obituary & Service Information

Funeral services for Peter Christopher Lewis will be 2:00 p.m....

Send flowers to the Lewis family.