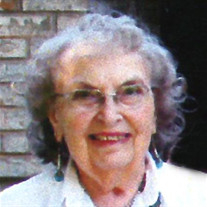 Funeral services for Rachelle LaVerne Hanan will be 2:00 p.m. Saturday, March 25, 2017, at the Elm and Murrow Church of Christ with Steve Hanan officiating. Interment will be in the Memorial Hill Cemetery under the direction of Marshall Funeral Home of Waynoka, LLC. There will be a visitation with the family at the church from 11:00 a.m. to 1:00 p.m. before the service. Rachelle LaVerne Hanan, daughter of the late Benjamin and Sadie (Brett) Leonhardt, was born July 27, 1919, at Ingersoll, Oklahoma, and died March 21, 2017, at Talala, Oklahoma, at the age 97 years, 7 months, and 20 days. After Rachelle graduated from Ingersoll High School, she attended Northwestern Oklahoma State University. On September 1, 1939, she was united in marriage to Stanley LeRoy Hanan. They lived in Belen, New Mexico, where she worked as a professional artist. In 1989, she moved to Stillwater until 2012, when she moved to Owasso, then to Talala. Where ever she lived, she belonged and attended the Church of Christ. She was a member of two chapters of the National League of American Pen Women, the Arts Chapter and the Letters Chapter. She was also a member of the New Mexico Art League, the Belen Art League and Beta Sigma Phi. Besides her parents, she was preceded in death by her husband, Stanley; one brother, Venroux Leonhardt; and one sister, Charlotte Brett Noltine. Rachelle is survived by two sons, Stanley “Scott” Hanan and wife, Corrine, of Talala, Oklahoma, and Steven Lance Hanan and wife, Doreen, of New Haven, Indiana; one sister, Theobelle Collins of Enid; one sister-in-law, Billie Hanan of Waynoka; eleven grandchildren, James Hanan, Jason Hanan, Jessica Hanan, Joel Hanan, Clarissa Hanan, Alec Hanan, Kyan Hanan, Maggie Hanan, Jared and Kami Hanan, Jordan Hanan and Elizabeth McKay, and Emily Hanan and fiancé, Mark Ward; other relatives and friends. Memorial contributions may be made through the funeral home to the Oklahoma Medical Research Foundation for Alzheimer’s Research.

Funeral services for Rachelle LaVerne Hanan will be 2:00 p.m. Saturday, March 25, 2017, at the Elm and Murrow Church of Christ with Steve Hanan officiating. Interment will be in the Memorial Hill Cemetery under the direction of Marshall Funeral... View Obituary & Service Information

The family of Rachelle LaVerne Hanan created this Life Tributes page to make it easy to share your memories.

Funeral services for Rachelle LaVerne Hanan will be 2:00 p.m....

Send flowers to the Hanan family.