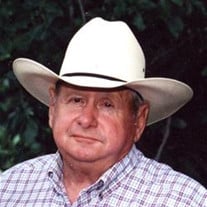 Memorial services for Eddie Bruner will be 2:00 p.m. Saturday, January 21, 2017, at the Carmen Christian Church with Pastor Kirk Board officiating. Arrangements are under the direction of Wentworth Mortuary, LLC, of Carmen. R. E.”Eddie” Bruner, age 81, of Carmen, Oklahoma, died Monday, January 16, 2017, at St. Mary’s Hospital, Enid, Oklahoma. He was born November 10, 1935 on a farm southeast of Dacoma, to Ralph E. Bruner and Wanda E. (Irwin) Bruner. He attended Redbird Elementary school riding his pony until his 6th grade year when his family moved to the farm west of Carmen. He graduated from Carmen High School in 1954. He attended Panhandle State University until the death of his father. He returned to the farm west of Carmen and began his farming career. In his lifetime, Eddie farmed and ran cattle and later sheep. He was a custom harvester for a few years from Texas to northern Nebraska . He was a farm supervisor working with troubled youth at the Helena Boys Training School. But throughout his life, he owned, bred, and trained thoroughbred race horses which was his true passion. Eddie enjoyed many things when not working. He was a skilled domino player. Enjoyed a good game of pitch. Would sit and watch any event his kids or grandkids participated in. He traveled all across the country but rarely was it a vacation. He met many people and could talk to anyone where ever he went. He and Winona were married June 29th, 1957 and would have celebrated 60 years of marriage this summer. It was by no means a perfect marriage but they figured out a way to make it work and have inspired those around them. He was preceded in death by his parents and sister, Karolyn. Survivors include his wife, Winona, of the home, daughter, Jada and husband, Michael Gailey, of Stillwater, son, Ryan of Watonga, grandchildren Wyatt, Evan, Zane, Liza, and Melissa, other relatives and friends. Memorial contributions can be made to Carmen First Responders or Carmen Christian Church through the funeral home. Remembrances may be shared with the family at www.marshallfuneralhomes.com.

Memorial services for Eddie Bruner will be 2:00 p.m. Saturday, January 21, 2017, at the Carmen Christian Church with Pastor Kirk Board officiating. Arrangements are under the direction of Wentworth Mortuary, LLC, of Carmen. R. E.&#8221;Eddie&#8221;... View Obituary & Service Information

The family of Ralph E. "Eddie" Bruner created this Life Tributes page to make it easy to share your memories.

Memorial services for Eddie Bruner will be 2:00 p.m. Saturday,...

Send flowers to the Bruner family.