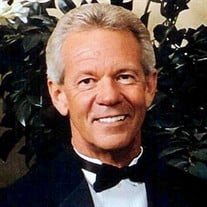 Randy Lynn Cunningham was born on November 13, 1946, in Alva, Oklahoma, to Rex and Vera Cunningham, and passed away on May 7, 2018, at Alliance Health, Clinton, Oklahoma. Randy attended Alva Public Schools and was a member of the Goldbug class of 1964. He enlisted in the Marine Corps in 1964 and served a tour of duty in Viet Nam. One of his favorite military experiences occurred when his brother, Walter, who was also serving in Viet Nam, came to the front line where Randy was stationed with a tank battalion, to visit him before being sent stateside. Walter walked miles through enemy territory to visit Randy. Although their visit was brief, their bond was lifelong. Semper Fi. Before he was honorably discharged, Randy was married to Cynthia Shorter on December 29, 1967. After their marriage they made their home in Garber, Oklahoma, while Randy attended Northern Oklahoma College and worked on the Garber Police Department. They later moved to Alva where Randy completed a B.S. Degree at Northwestern Oklahoma State University. While completing his degree, Randy worked at the Helena State School for Boys. Following graduation, Randy was appointed as a Deputy U.S. Marshal, completing his training in Glynco, Georgia. He was assigned to the U.S. Marshal’s office in Houston, Texas. Several years later Randy transferred to the Bureau of Alcohol, Tobacco and Firearms (ATF) where he served as a Special Agent until his retirement. Randy had numerous assignments throughout his career with ATF, including serving on protection details for presidential candidates. Following his retirement he opened a private investigation firm in Houston, which he operated until returning to Oklahoma. One of his investigations was the subject of an hour-long TV documentary on ABC’s 20-20. At the time of his death Randy was residing at the Veterans Center in Clinton, Oklahoma. Randy was preceded in death by his father, Rex Cunningham; his brother, Walter Cunningham; his grandparents, Merel and Mayme Cunningham; and other family members. Randy is survived by his mother, Vera Straw; his sister, Vicki Cunningham; his brother, Rick Cunningham; and other family and friends. At his request, Randy was cremated and there will be a private family service.

Randy Lynn Cunningham was born on November 13, 1946, in Alva, Oklahoma, to Rex and Vera Cunningham, and passed away on May 7, 2018, at Alliance Health, Clinton, Oklahoma. Randy attended Alva Public Schools and was a member of the Goldbug... View Obituary & Service Information

The family of Randy Lynn Cunningham created this Life Tributes page to make it easy to share your memories.