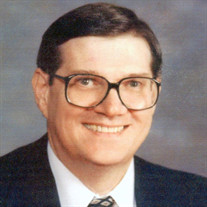 Funeral services for Ray Dennis Lau will be 10:30 a.m. Thursday, April 20, 2017, at the Town and Country Christian Church with Pastor Paul Cole officiating. Interment will be 2:30 p.m. Thursday, April 20, 2017, at the Canton IOOF Cemetery under the direction of Marshall Funeral Home of Alva. Ray Dennis Lau, son of the late Alvin and Viola Eleanora (Steigman) Lau, was born August 10, 1946, at Clinton, Oklahoma, and passed away April 16, 2017, at Alva, Oklahoma, at the age of 70 years, 8 months, and 5 days. After Ray graduated from Clinton High School, he obtained his Bachelor of Education and his Master of Education Degree in English from Southwestern Oklahoma State University. He then began his teaching career at Anadarko where he taught English for 3 years. On May 25, 1968, he was united in marriage to Cherie Ann Garriott at the Canton Christian Church in Canton, Oklahoma. Ray and Cherie taught school at Anadarko until 1970 when they moved to Drummond. At this time, Ray became Librarian and English teacher while Cherie taught 2nd Grade. Shortly after their marriage, Ray was drafted into the Army and was honorably discharged in 1968 after a hip ailment. During the summers of 1969-1971, Ray attended library school at Emporia State University in Kansas, and two weeks later joined the faculty at Southwestern, serving as Cataloging Librarian and Instructor of Library Education. Two sons were born to the couple, Marc Garriott in 1972 and Justin Ray in 1976. In May, 1974, they moved to Alva, where Ray was appointed Library Director and Head of the Library Science Department at Northwestern. Ray enjoyed every single day of his career at NWOSU. Ray served the Oklahoma Library Association in various capacities and the Northwestern community as Director of Libraries during a career spanning 29 years. As a member of the OLA, he served as chair of the Sequoyah Children’s Book Award Committee from 1974-78 and as the association’s treasurer from 1981-1983. He was elected to the Council of the American Library Association in 1984 and received the Distinguished Service Award as Councilor for the ALA in 1988. During his career, Lau also served two terms on both the Advisory Board to the OU School of Library in Information Studies and the Governor’s Conference on Libraries. He was honored with the OLS’s Special Meritorious Service Award in 2003. In 2007, Ray, as well as Miss Duvall and Miss Gorman, were selected as recipients of the Oklahoma 100 Library Legends. As a child, Ray was confirmed at Trinity Lutheran Church at Clinton and was later immersed at the Canton Christian Church. After moving to Alva, he and Cherie became Charter Members of the Town and Country Christian Church where he was a former Elder, Sunday School Teacher, VBS teacher, and wrote his own communion meditations. His other hobbies were genealogy, antiques, and traveling. Ray is survived by his wife, Cherie, of Alva; two children, Marc Garriott Lau and wife, Melissa, of Oklahoma City, and Justin Ray Lau and wife, Shawna, of Alva; three siblings, his twin, Ross Danny Lau and wife, Linda, of Clinton, Janie Branstetter and husband, Brian, of Duncan, and Alvin Lau, Jr. and wife, Dana, of Owasso; two grandchildren, Addison Nicole Lau and Nolan Ray Lau; other relatives and friends. Memorial contributions may be made through the funeral home to the Town and Country Christian Church or the Northwestern Oklahoma State University Foundation.

The family of Ray Dennis Lau created this Life Tributes page to make it easy to share your memories.

Send flowers to the Lau family.