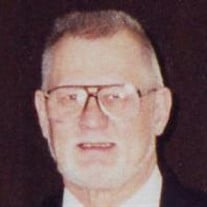 Memorial services for Raymond Ptak will be 10:00 a.m., Saturday, April 13, 2019, at the Marshall Funeral Home Chapel with Rev. Chris Ruwalt officiating. Cremation arrangements are under the direction of Marshall Funeral Home of Alva. Raymond Norman Ptak was born November 8, 1935, in Cleveland, Ohio, to Stanley and Helen Ptak. He passed away March 20, 2019, at the age of 83 years, 4 months, and 12 days. Ray proudly served in the United States Air Force for 23 years. While serving, he was stationed in California, Tennessee, completed a tour in Vietnam, stationed in France and Stuttgart, Germany before returning to the United States. After returning, he was stationed in Florida, Mississippi, and finally to McConnell AFB in Wichita, Kansas, where he retired in 1976 as a Technical Sergeant. Ray eventually moved to Cherokee, Oklahoma, but continued to work at a warehouse in Wichita for another year and a half. He started working for Walmart in Alva in 1997 and continued there until he retired in 2011. After retirement, he moved to Alva and made his home at the Homestead for several years until his final move to Share Convalescent Home. Ray had four children with his French wife, Odette, whom he met while stationed in France. Besides his parents, he was preceded in death by his first born infant daughter, Helen, his oldest son, Steven Ptak and Steven’s wife, Cynthia. Ray is survived by one son, Alain Ptak of Germany; one daughter, Chantal Ergh and husband, Paul, of Copley, Ohio; his grandchildren, Isabella and Lucas Ergh, and Nicolle and Steven Ptak.

The family of Raymond Norman Ptak created this Life Tributes page to make it easy to share your memories.

Send flowers to the Ptak family.