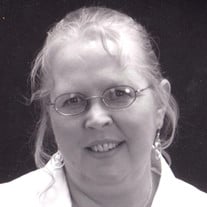 Funeral services for Rebecca Cope Nutter will be 2:00 p.m. Tuesday, April 3, 2018, at the First Baptist Church of Waynoka with Pastor Brian Holland officiating. Interment will be in the Memorial Hill Cemetery under the direction of Marshall Funeral Home of Waynoka. Rebecca Kathlene, daughter of the late Robert Eugene Bence and Patricia Ann (Bell) Triplitt, was born April 1, 1961, at Waynoka, and passed away March 29, 2018, at her home northeast of Waynoka at the age of 56 years, 11 months, and 28 days. Becky attended school in Abilene and Solomon, Kansas. She moved to the Tulsa area before returning to Waynoka in 1991. She attended the First Baptist Church in Waynoka. She worked many years in healthcare at Alva and Waynoka. Becky loved spending time with her family, especially her grandkids. She loved watching them play sports and enjoyed doing whatever her grandkids suggested. Besides her parents, she was preceded in death by her daughter, Amanda Hall. She is survived by her husband, Paul Nutter, of Waynoka; four children, April Stackhouse of Waynoka, Patrick Stackhouse of Waynoka, Patricia Ford and her husband, Kevin, of Garfield, Kansas, and Tina Earhart and her husband, Brett, of Enid; eight grandchildren, Autumn Smith and fiancé, Ryan Weir, Blake Inman, Katie Inman, Cameron Smith, Lane Inman, Hope Hall, John Hall, and Adam Stackhouse. Also surviving are her siblings, Robert Bence of Woodward, Kenneth Bence of Woodward, Scott Bence and his wife, Karen, of Waynoka, Robin Bence of Waynoka, Kim Harris and her husband, Bruce, of Coos Bay, Oregon, Larry Goff and his wife, Michele, of Farmington, New Mexico, Roberta Freeze of Justin, Texas, and Kim Phillips and her husband, Jimmy, of Denison, Texas; nieces, nephews, great nieces, and great nephew; other relatives and friends. Memorial contributions may be made through the funeral home to the First Baptist Church of Waynoka or the Waynoka All Sports Club.

Funeral services for Rebecca Cope Nutter will be 2:00 p.m. Tuesday, April 3, 2018, at the First Baptist Church of Waynoka with Pastor Brian Holland officiating. Interment will be in the Memorial Hill Cemetery under the direction of Marshall... View Obituary & Service Information

The family of Becky Cope Nutter created this Life Tributes page to make it easy to share your memories.

Funeral services for Rebecca Cope Nutter will be 2:00 p.m. Tuesday,...