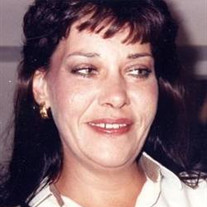 Funeral services for Regina Kay Murrow will be 2:00 p.m. Tuesday, December 22, 2015, at the Waynoka First Baptist Church with Rev. Charles Newton officiating. Interment will be in the Haskew Cemetery under the direction of Marshall Funeral Home of Waynoka. Regina Kay Murrow, daughter of Patsy Stephens and the late Herman Jay Stephens, was born August 15, 1953, in Woodward, Oklahoma, and passed away December 17, 2015, at Enid, Oklahoma, at the age of 62 years, 4 months, and 3 days. Regina attended school in several places before graduating from Waynoka High School. On January 6, 1971, she was united in marriage to Gary Leroy Murrow at Waynoka. She worked for a time as a respiratory therapist, then became an administrative assistant for an oil field company. She has lived in Woodward for the last 20 years. She enjoyed growing things, especially flowers, and watching bullriding. Her family was especially important to her as she dearly loved her kids and grandkids. Besides her father, she was preceded in death by one brother, Rick Stephens; and one sister, Rachelle Jackson. Regina is survived by two sons, Trent Murrow and wife, Renae, of Waynoka, and Travis Murrow of Alva; her mother Patsy Stephens of Enid; one brother, Rusty Stephens of Alva; two sisters, Becky Burpo and husband, Greg, of Garber, and Robbie Deifenbach and husband, Eddie, of Alva; seven grandchildren, Trevor Cunningham and wife, Rachel of Alva, Joshua Cunningham and wife, Sara, of Waynoka, Zachery Smith of Council Grove, Kansas, Garrett German of Alva, Stetson Howland of Perry, and Wacey and Bandi Murrow, both of Arnett; 6 great grandchildren; other relatives and friends. Memorial contributions may be made through the funeral home to the Oklahoma Medical Research Foundation for cancer research.

Funeral services for Regina Kay Murrow will be 2:00 p.m. Tuesday, December 22, 2015, at the Waynoka First Baptist Church with Rev. Charles Newton officiating. Interment will be in the Haskew Cemetery under the direction of Marshall Funeral Home... View Obituary & Service Information

The family of Regina Kay Murrow created this Life Tributes page to make it easy to share your memories.

Funeral services for Regina Kay Murrow will be 2:00 p.m. Tuesday,...

Send flowers to the Murrow family.