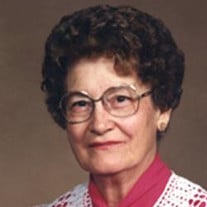 Graveside services for Retta Ann Woolley will be 1:00 p.m. Saturday, July 21, 2012, at the Waynoka Municipal Cemetery with Rev. Ken Higgins officiating. Interment is under the direction of Marshall Funeral Home of Waynoka, LLC. Retta Ann Woolley, daughter of the late Charlie and Mildred (Sweargin) Trammell, was born January 5, 1917, in Woods County, Oklahoma, and passed away July 18, 2012, at Waynoka, Oklahoma, at the age of 95 years, 6 months, and 13 days. Retta attended rural schools near Waynoka. On December 22, 1934, she was united in marriage to Ralph Floyd Woolley at Waynoka, Oklahoma. She worked as a telephone operator during and after World War II. She then worked at the Waynoka School Cafeteria and Rexall Drug Store until her retirement in 1970. She was a member of the Waynoka Church of God, the Waynoka Saddle Club, and the Waynoka Senior Citizens. She enjoyed dancing, collecting antique dishes, and spending time with her children, grandchildren, and great grandchildren. Besides her parents, she was preceded in death by her husband, Ralph; four brothers, Robert, Roy, Lee, and Edsel Trammell; and four sisters, Rosa Lebow, Ruby Milledge, Viola Alexander, and her twin, Reta Snyder. Retta is survived by two sons, Veldon Woolley of Waynoka; and Verlin Woolley and wife, Shirley, of Blanchard; three grandchildren, Rhonda Bridwell and husband, Frank, of Grapevine, Texas, Michelle Godeaux of Portland, Oregon, and Kimberly Woolley of San Diego, California; two great grandchildren, Shelly Bridwell and Venita Godeaux; other relatives and friends. Memorial contributions may be made through the funeral home to Waynoka Church of God.

The family of Retta Ann Woolley created this Life Tributes page to make it easy to share your memories.

Graveside services for Retta Ann Woolley will be 1:00 p.m. Saturday,...