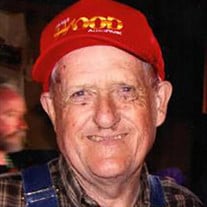 Rex Boswell, 93, died peacefully on January 1, 2021, in Greenville, TX after a valiant battle with cancer. Rex will be dearly missed by his family and those friends and acquaintances he leaves behind. Rex was born on December 4, 1927, and raised on a farm north of Waynoka near Avard, OK. Except for the last two years of his life, Rex lived his entire life on that farm. After graduating from high school in Avard, Rex spent his working life as a farmer in Woods County. Rex’s grandparents, Frederick and Elizabeth Hamel and Henry and Eliza Boswell, were among the pioneering families of Woods County. Rex loved going to the movies. He especially enjoyed Westerns. He was an avid stamp collector and was always up for a game of dominoes or pitch. Rex loved finding coins and thought he should be in the Guinness Book of World Records because of the number of lost coins he had found. Rex is survived by his sister, Patsy (Boswell) Helton of Rockwall TX, formerly of Greenville, TX, nephews Brad Helton and wife Shirley, Roger Helton and wife Kay, Jay Petty, great nieces and nephews Jennifer Watkins, Cole Helton, Laura Bonilla, Christy South, Jason Helton, Lynden and Aaron Petty, and numerous great great nieces and nephews. Rex was preceded in death by his beloved niece, Sharla Helton Petty, brother-in-law, Thurmon Helton and parents Charlie and Edna Boswell. Rex will be laid to rest at Memorial Hill Cemetery outside of Waynoka at 10:00 a.m. Friday, January 8, 2021, with Bill David Walker officiating. Interment is under the direction of Marshall Funeral Home of Waynoka, LLC. In lieu of flowers, memorial contributions can be made to the Waynoka Church of Christ on Elm Street.

Rex Boswell, 93, died peacefully on January 1, 2021, in Greenville, TX after a valiant battle with cancer. Rex will be dearly missed by his family and those friends and acquaintances he leaves behind. Rex was born on December 4, 1927, and... View Obituary & Service Information

The family of Rex Boswell created this Life Tributes page to make it easy to share your memories.

Send flowers to the Boswell family.