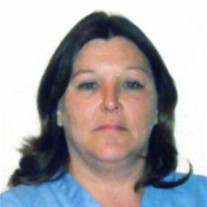 Visitation for Rhonda Louise Garris will be Tuesday, May 10, 2016, from 9:00 a.m. to 8:00 p.m. and Wednesday, May 11, 2016, from 9:00 a.m. to 4:00 p.m. at Marshall Funeral Home of Alva. Cremation will follow the visitation. Rhonda Louise Garris, daughter of the late Roy Edward and Anna Louise (Horner) Shain, was born May 11, 1966, in Dallas, Texas, and passed away May 7, 2016, at Enid, Oklahoma, at the age of 49 years, 11 months, and 26 days. Rhonda attended South High in Bakersfield, California. On April 11, 1997, she was united in marriage to David Wayne Garris in Bakersfield, California. She worked as a caregiver. She moved from Bakersfield to Alva last year. She was a member of the Mormon Church. Besides her parents, she was preceded in death by her husband, David. Rhonda is survived by two sons, Shaun McLelland of Alva, Jason McLelland and wife, Alma, of Bakersfield, California; two daughters, Deann Schneider and husband, Shaun of Alva, and Ashley McLelland of Alva; three brothers, Norman Shain of St. Louis, Illinois, Roy Edward Shain, Jr. and wife, Stacey, of Champaign, Illinois, and Brian Shain and wife, Rebecca, of Bakersfield; and one sister, Michelle McLelland, of Alva. Also surviving are 11 grandchildren, Sarena McLelland, Kylie Schneider, Jordan McLelland, Jasmine McLelland, Taylor Draper, Jason McLelland, Jr., Rian McLelland, Dylan Schneider, Landon Draper, Erik Madrigal, Bryan Madrigal; other relatives and friends. Memorial contributions may be made to the funeral home to help with funeral expenses.

The family of Rhonda Louise Garris created this Life Tributes page to make it easy to share your memories.

Visitation for Rhonda Louise Garris will be Tuesday, May 10,...

Send flowers to the Garris family.