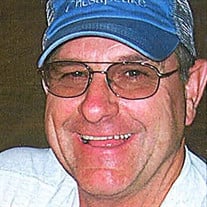 Richard Bradford, age 67, of Waynoka Oklahoma went to be with our Lord on November 17, 2017. His passing occurred at MD Anderson Hospital in Houston, Texas when he finally lost his long battle with cancer. Richard was born on February 25, 1950 in Sayre, Oklahoma to Isaac (Junior) and Irona Cruze Bradford. He was raised in Waynoka and graduated from Waynoka High School in 1968. Following graduation, he briefly attended Northwest Oklahoma State University before moving to Oklahoma City. On December 17, 1976, Richard was united in marriage to Susan Harris. They made their home in Oklahoma City and moved back to Waynoka in 1981 to raise their family in the rural area. Richard worked as a carpenter for many years and then as a lab technician at Clean Harbors. He and Susan also owned and operated Waynoka Lumber for several years. He was extremely active in raising his four sons, Dustin, Erick, Joe and Matt. He coached their ball teams, led the boys’ church groups, supported their school activities and touched the lives of many young people in Waynoka. Richard loved the Lord, his family and the Waynoka community. He was a member of the First Baptist Church of Waynoka where he served the Lord with gladness. He served on the Waynoka City Council and retired as a member of the Waynoka Fire Department. Richard was also a member of both the Alva Order of the Eastern Star and Waynoka Masonic Lodge 422. He was a Mason for over 20 years, serving as Worshipful Master 3 years and as the District Deputy Grand Master of District 4 for over 4 years. Preceding Richard in death is his father, mother, one sister, Mary Rohla, of Chester and an infant sister, Peggy Louise. He is survived by his wife, Susan, of the home, and his sons and daughters-in-law, Dustin and Deena of Edmond, Erick and Katie of Oklahoma City, Joe and Angel of Kingfisher and Matthew and Leah of Waynoka. Richard treasured his 9 surviving grandchildren, Madison Bradford, Kellen Bradford, Aryana and Alyssa Bradford, Kaleb Bradford, Kaelyn Bradford, Chanan Wyatt, Kale Westfahl and Grant Westfahl. Richard is also survived by his brothers and sisters-in-law, Jerry and Deborah of Canton, Boyd and Lola of Waynoka, Troy and Cindy of Waynoka, one brother-in-law, Dick Rohla of Chester and one aunt, Juanita Bradford of Burkburnett, Texas. His infectious smile and big bear hugs will also be sorely missed by many precious nieces and nephews, cousins and a host of friends. A Celebration of Life for Richard, under the direction of Marshall Funeral Home, will be held Saturday, December 2 at the Waynoka School Multi-Purpose Building from 4:00-6:00 PM. Memorial contributions can be made to the Fallen Railroader Scholarship or the Waynoka Fire Department.

Richard Bradford, age 67, of Waynoka Oklahoma went to be with our Lord on November 17, 2017. His passing occurred at MD Anderson Hospital in Houston, Texas when he finally lost his long battle with cancer. Richard was born on February 25,... View Obituary & Service Information

The family of Richard Bradford created this Life Tributes page to make it easy to share your memories.

Richard Bradford, age 67, of Waynoka Oklahoma went to be with...

Send flowers to the Bradford family.