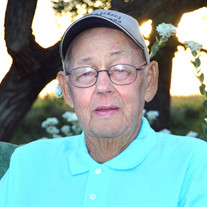 Funeral services for Richard Emil Kornele will be 1:00 p.m. Saturday, April 29, 2017, at the Ft. Supply First United Methodist Church with Reverend Mark McDonald officiating. Interment will be in the Fairlawn Cemetery at Fort Supply under the direction of Marshall Funeral Home of Alva. Richard Emil Kornele, son of the late Albert and Orva Kornele, was born February 27, 1939, in the family home in Woodward, Oklahoma, and entered into eternity on April 26, 2017, at the age of 78 years, 1 month, and 29 days. Richard grew up and attended school in Fort Supply where he was active in basketball, FFA, and he was a school bus driver to make extra money in high school. He married his high school sweetheart, Sandra Jones, and had three children, Kim, Yolanda, and Rick. He was a carpenter his entire adult life. His friends laughed and said he had sawdust in his veins. When he graduated high school, he traveled throughout Kansas and Oklahoma building grain elevators. He worked hard all of his life, but took great pride in the buildings and homes he built. He retired several times, but got bored and went back to work. In his later years he was a job foreman for Kline Mechanical Contracting, where he was in charge of multi-million dollar job sites. He was especially proud that when he laid out the Northwestern campus in Woodward they brought in global positioning satellites and he “was only a half inch off”. He had numerous health problems including bladder cancer, but that did not stop him from building as he built his own porch after moving to Alva to be closer to his children. He had a great sense of humor and quick but very dry wit. Besides his parents, he was preceded in death by four siblings, Verla Lee Kitzman, Leroy Kornele, Dwayne Kornele, and Arnold Kornele. Richard is survived by his children, Kim (Kornele) Foster and husband, Stephen, Yolanda Kornele, and Rick Kornele and wife, Christie. He is also survived by his beloved grandchildren that he took every opportunity to brag about, Natasha Foster, Bradley Kornele and wife, Chelsea and a baby on the way that he was sure is a girl, Danielle Kornele, and Hannah Kornele; his brother, Wayne Kornele and wife, Wanda, of Ft. Supply; his sister, Alberta Stout of Woodward; and numerous nieces, nephews, and friends. In lieu of flowers, contributions may be made through the funeral home to the Alva 4-H Club where his grandchildren were very active. Richard was greatly loved and will be greatly missed.

Funeral services for Richard Emil Kornele will be 1:00 p.m. Saturday, April 29, 2017, at the Ft. Supply First United Methodist Church with Reverend Mark McDonald officiating. Interment will be in the Fairlawn Cemetery at Fort Supply under the... View Obituary & Service Information

The family of Richard Emil Kornele created this Life Tributes page to make it easy to share your memories.

Funeral services for Richard Emil Kornele will be 1:00 p.m. Saturday,...

Send flowers to the Kornele family.