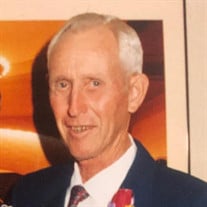 Graveside services for Richard Allen Zook will be held at 10:00 a.m. Friday, May 22, 2020, at the Waynoka Municipal Cemetery. Interment is under the direction of Marshall Funeral Home of Waynoka, LLC. Richard Allen Zook, son of the late James Richard and Verda Pauline (Grant) Zook, was born February 15, 1937, in Waynoka, Oklahoma, and passed away May 18, 2020, in Enid, Oklahoma, at the age of 83 years, 3 months, and 3 days. Richard graduated from Waynoka High School and served his country in the United States Army. He soon married and became the proud father of two children. After a brief period following his time in the service, he worked with the railroad. Eventually, he traveled to the state of Wyoming, where good times were spent working on the ranch with his good friend, Gerald Ferguson. He often spoke fondly of his Wyoming memories, as do his children. Richard eventually returned to Oklahoma where he began work with the Farmers Coop. Ever the charmer, he soon made the acquaintance of a fellow Woods County gal and married Ava Hodges. Richard and Ava continued to make their home in Waynoka, where they enjoyed time spent gardening, vacationing to their cabin in New Mexico and chasing grandkids. He continued to work many years at the Farmer’s Coop until retirement. He greatly enjoyed hunting, fishing (except for trout) and trapping season. He was an avid gardener and could grow just about anything. He also especially enjoyed and was quite talented at cooking, canning and preserving foods. You could also spark his attention by tempting him with a few hands of pitch, where of course, winning was the only option! Besides his parents, he was preceded in death by one brother, Gary Zook. Richard is survived by a daughter, Cindy Seaman and husband, Bill, of Waynoka; a son, Robert Zook of Alva; step-daughter LaJeana Williams of Ringwood; La Tiara Adams of Alva; one sister, Rosa Lee Whipple and husband, Dennis, of Waynoka. Also surviving are six grandchildren, Kori Allison and husband, Jeremy, of Waynoka, Bart Seaman and wife, Lindsay, of Waynoka, Leah Bradford and husband, Matthew of Waynoka, Misty Smiley and husband, Scott, of Waynoka, Amber Adams of Canton, and Amy Webb of Enid; 14 great grandchildren and a host of other relatives and friends. Memorial contributions may be made through the funeral home to the Waynoka EMT Chapter.

Graveside services for Richard Allen Zook will be held at 10:00 a.m. Friday, May 22, 2020, at the Waynoka Municipal Cemetery. Interment is under the direction of Marshall Funeral Home of Waynoka, LLC. Richard Allen Zook, son of the late James... View Obituary & Service Information

The family of Richard Allen Zook created this Life Tributes page to make it easy to share your memories.

Graveside services for Richard Allen Zook will be held at 10:00...