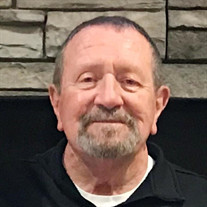 Memorial services for Rick Lynn Woolley will be 1:00 p.m. Thursday, September 23, 2021, at the Bible Baptist Church with Pastor John Clapp officiating. Rick was cremated at his request under the direction of Marshall Funeral Home of Alva. Rick Lynn Woolley, son of the late Bert Irving and Verna Ellen (Fiscus) Woolley, was born August 12, 1944, in Waynoka, Oklahoma, and passed away September 10, 2021, in Oklahoma City, Oklahoma, at the age of 77 years and 28 days. Rick graduated from Waynoka High School. On November 28, 1964, he was united in marriage to Martha Lewis Jones in Waynoka. He began his career with the Santa Fe Railroad when he was 17 years old as an apprentice. His career with the Railroad took him to Texas, New Mexico, Illinois, and finally Topeka, Kansas, where he retired from Burlington Northern Santa Fe Railroad in 2004 as a Regional Division Crew Manager. In his 42 years with the railroad he made many good friends along the way. He moved to Alva in 2006 to be near his family and grandchildren. He was a member of Waynoka Masonic Lodge #422. Rick was an avid OU fan and on any game day you could find him decked out in his lucky Sooners wear in front of the game with all the excitement and enthusiasm of being there in person. He enjoyed watching bull riding and keeping up with all the individual riders’ standings. Rick loved being around his grandkids and taking care of them after school when they were young and attending all of their events as they got older. He was a very proud PaPa who loved all his grandchildren and was even an adopted PaPa to many of his grandkids’ friends. Besides his parents, he was preceded in death by one sister, Beverly Lyon. Rick is survived by one son, Donal Woolley of Waynoka; two daughters, Michelle Nally and husband, Rudy, of Pierceville, Kansas, and Melissa Harzman and husband, Lance, of Alva; one sister, Joleta Criswell of Waynoka; grandchildren Dakota Littrell and wife Kelli, Angela Ketcherside and husband Jordan, Dalton Littrell, Kylee Harzman, Kinsey Harzman, great grandchildren Haven, Kynlee, and Kyndra Littrell, and his good friend George Wong and wife Kristin and children Hunter and Emma; other relatives and many many friends. Memorial contributions may be made through the funeral home to the Oklahoma Medical Research Foundation for Rheumatoid Arthritis research.

Memorial services for Rick Lynn Woolley will be 1:00 p.m. Thursday, September 23, 2021, at the Bible Baptist Church with Pastor John Clapp officiating. Rick was cremated at his request under the direction of Marshall Funeral Home of Alva. Rick... View Obituary & Service Information

Memorial services for Rick Lynn Woolley will be 1:00 p.m. Thursday,...