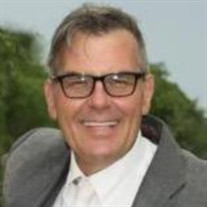 Memorial services for Ricke Seal will be 2:30 pm Sunday, February 28, 2021 at Marshall Funeral Home Chapel with Max Ridgway officiating. Cremation arrangements are under the direction of Marshall Funeral Home. Ricke Merlin Seal, son of Jimmy Alice (Haas) Seal and the late Clyde Merlin Seal, was born May 19, 1966, at Medicine Lodge, Kansas, and passed away unexpectedly over the weekend at his home at the age of 54 years. Ricke lived in Alva most of his life, graduating from Alva High School in 1984. He was a hard worker and began his career working in the family concrete business. In his 20s he began a career of long haul trucking, earning an award for driving over one million miles with no accidents. On July 16, 1994, he was united in marriage to Elizabeth Kennedy. To this union two beautiful daughters were born: Emily Ann Seal on May 7, 1996, and Virginia May Seal on November 2, 1997. He made his home in Ponca City for many years and eventually moved back to Alva. After a short stint in the oilfield during the boom, he began working at VAP and worked there for many years. Ricke enjoyed riding his motorcycle with his friends every chance he got. He had an absolute love for music, whether it was playing drums for the church choir, playing his guitar, or just flat out singing. He enjoyed calling his loved ones and singing “Happy Birthday” whenever he had the chance. He was very spiritual and had become very close with God. He is loved by many and will be missed by even more. Ricke was preceded in death by his father, Clyde Seal; his stepfather, Raymond Jacobson; maternal grandparents, Charles and Velma Haas; his paternal grandfather, Merlin Seal; half brother, Matthew Seal; and stepbrother, Curtis Johnson. He is survived by his mother, Jimmy Jacobson of Alva; ex-wife, Elizabeth Kennedy of Alva; daughters, Emily Seal of Alva and Virginia “Ginny” Seal of Cherokee; grandson, Cooper Kyle of Cherokee; siblings, Bryan Jacobson and Angie Littrell of Medicine Lodge, Jason and Heidi Jacobson of Moore, half sister, Cara Diane Seal of Ponca City; paternal grandmother, Imogene Young of Ponca City; his aunt, Melva and Gary Keen, of Ponca City; many nieces and nephews, other relatives and friends. Memorial contributions may be made in his memory to the funeral home or to the Oklahoma Medical Research Foundation.

The family of Ricke Merlin Seal created this Life Tributes page to make it easy to share your memories.

Memorial services for Ricke Seal will be 2:30 pm Sunday, February...

Send flowers to the Seal family.