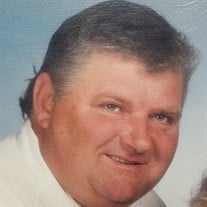 Rickie Kent Starks, son of the late Wallace Richard and Madeline Mae (Jensen) Starks, was born September 5, 1954, in Anthony, Kansas. Rick passed away January 23, 2019, in Alva, Oklahoma, at the age of 64 years, 4 months, and 18 days. He was cremated at his request and there is no service planned at this time. Rick attended school in Amorita and accepted Christ at the Alva Church of the Nazarene. On August 18, 1983, he was united in marriage to Melodie Drue Stiles. Rick lived north of Alva most of his life working as a farm hand, in construction, harvesting and raising livestock. He was a transport driver for Hamm & Phillips for 15 years, then worked for Woods County until his retirement. He enjoyed being home taking care of his cattle, working with his harvest crews, was an avid deer hunter and enjoyed taking his family fishing. He was preceded in death by his parents. Rick is survived by his wife, Melodie, of Alva; his son, Kent Allen Starks and wife, Stephanie, three grandchildren, Skyler, Dakota, and Mariah Starks, of Peck, Kansas; a brother, Richard Starks and wife, Carolyn, of Enid; nephew, Damien Starks and wife, Brenda, and their children, Chandler and Channing; niece Rachelle Pohlman; step-sister, Janet Schwerdtfeger, nephews Jeff, Kendal and niece Mindy. He is also survived by his mother-in-law Shirley Stiles of Alva; sister's-in-law Cheryl Snowden and husband Michael, nephew Jake and niece Shelby Snowden of Mustang, OK; Marilee Quick and husband Bryan of Hazelton, KS, nephews, Corbyn, Cameron & Chasen Quick; niece Tracy Karmun & her daughter Paige of Oklahoma City. They were all very special to him and enjoyed their fun loving "Uncle Rick". He enjoyed his neighbors and treasured the helpful bunch of guys he was honored to call friends that were always there for him. Remembrances may be shared with the family at www.marshallfuneralhomes.com.

Rickie Kent Starks, son of the late Wallace Richard and Madeline Mae (Jensen) Starks, was born September 5, 1954, in Anthony, Kansas. Rick passed away January 23, 2019, in Alva, Oklahoma, at the age of 64 years, 4 months, and 18 days. He was... View Obituary & Service Information

The family of Rickie Kent Starks created this Life Tributes page to make it easy to share your memories.

Send flowers to the Starks family.