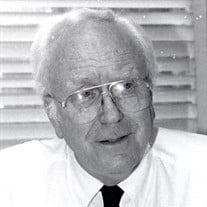 Funeral services for Robert Leo Martin will be 2:00 p.m. Thursday, September 29, 2016, at the First Presbyterian Church with Martha Evans officiating. Interment will be the in Alva Municipal Cemetery under the direction of Marshall Funeral Home of Alva. There will be a visitation Wednesday with the family from 7:00 p.m. to 8:00 p.m. at the funeral home. Robert L. Martin, Sr., was born in Barnard, Lincoln County, Kansas, on July 6, 1929, the son of Leo Howell and Mabelle Anna Robison Martin. He passed away Saturday, September 24, 2016, at St. Mary’s Regional Medical Center in Enid, Oklahoma Mr. Martin attended public school in Concordia, Kansas and in 1951, he earned a BS Degree in speech, English, and psychology from Kansas State Teacher’s College in Emporia, Kansas. He also earned a MS degree in communications from KSTS in 1956. Active in community affairs, Bob was the first director and president of the Alva Community Theatre (1972). As a member of the Benevolent and Protective Order of the Elks, he served as the District Deputy from 1968 to1969 and vice-president of the Oklahoma Elks Association in 1973 and 1974. Bob served multiple terms as the exalted ruler of the local Alva Elks Lodge and served on the Elks National Foundation. He is a past president of the Alva Rotary and served as an elder of the First Presbyterian Church. Bob and Mary Jo were married in April, 1952 and made their first home in Chanute, Kansas, where Bob taught at Neosha County Community College. In 1958, they moved to Alva where Bob was the general manager of KALV radio. In 1966, Bob joined the faculty at Northwestern Oklahoma State College where he was an assistant professor of speech until his retirement in 1994. He received the John Sheffield Teacher of the Year Award in 1994. His teaching interests covered the fields of theater, radio, television, public speaking, oral interpretation, and debate. Besides his parents, Bob was preceded in death by one sister, Geneva Weaver. He is survived by his wife of 64 years, Mary Jo, and his children, Robert Jr. of Grove, Oklahoma and Dana Golbek of Kingfisher, Oklahoma. Additional family members include two grandsons and their wives, Eric and Requil Golbek and their children, Ethan, Andrew and Emily of Tulsa and Mark and Chelsea Golbek and their children, Cord and Chloe of Kingfisher. Bob is also survived by his sister, Maxine White Branine of Pueblo, Colorado and seven nieces and nephews who reside in Colorado and Kansas, other relatives and many friends. In lieu of flowers, donations may be made through the funeral home in Mr. Martin’s name to the Northwestern Oklahoma State University Foundation or the Alva Presbyterian Church Organ Renovation Fund.

Funeral services for Robert Leo Martin will be 2:00 p.m. Thursday, September 29, 2016, at the First Presbyterian Church with Martha Evans officiating. Interment will be the in Alva Municipal Cemetery under the direction of Marshall Funeral... View Obituary & Service Information

The family of Robert L. Martin created this Life Tributes page to make it easy to share your memories.

Funeral services for Robert Leo Martin will be 2:00 p.m. Thursday,...