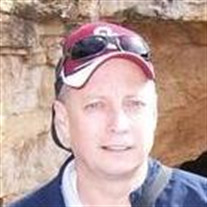 On July 5, 2019, the world lost an amazing Husband, Father, Grandpa, Son, Brother, Uncle, and Friend. Robert Allen McMurphy, Sr. returned home to his Heavenly Father after a short battle with Parkinson’s Disease and metastatic cancer. His kind, loving, and generous spirit will truly be missed by many. He is now reunited with his beloved mother Rita Mae, and his step-son Shaun Cover. Robert Allen was loved by all who met him! He worked hard and his faith guided him, which showed in his selfless service to others. He was a loving and dedicated husband to his wife Karen of 17 years, and a devoted father to five children- Bobby (Rachelle), Korey (Jeweli), Sarah (David), Andrew (Jessica), and Laura (Justin). He was adored by all his grandchildren - Allison, Alexis, Anthony, Austin, Kayli, Alexa, Mattix, Olivia, Mason, Aubree, and Kyla. Robert was born in Okmulgee, OK, to Rita Mae and Robert LaMoine McMurphy on December 10, 1955. He was known to his family by Allen, and grew up with two wonderful brothers - Les (Sandy) and Steve (Sandra). He worked for over 25 years with KFC, and in 2001 started work at Centinela State Prison in Imperial, CA, as a Correctional Officer until his passing. In October of 2001 his son Bobby and wife introduced him to Karen, and they were sealed in the San Diego Temple for time and all eternity on January 21, 2002. They lived together in Alpine, CA, with his step-son Shaun and his youngest son Andrew for 2 ½ years, then moved to Yuma, AZ, where they resided for 15 wonderful years together. Robert and Karen enjoyed traveling in their RV, serving in the church, visiting friends, spending quality time with family, and playing with their pets. They especially enjoyed their trips to Oklahoma to visit with his father and step-mother, Devona, and all the Oklahoma McMurphy’s and friends. Robert Allen McMurphy was an amazing man. Our hearts are broken, but our memories of him will continue on until we all meet again. We love you, Robert Allen McMurphy. May you rest in peace until our grand reunion. Memorial services were held at 10:00 a.m., July 20, 2019, at Yuma, Arizona.

The family of Robert Allen McMurphy Sr. created this Life Tributes page to make it easy to share your memories.

Send flowers to the McMurphy family.