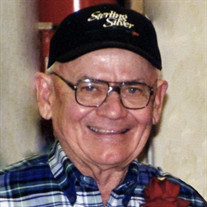 Funeral services for Robert Edd Sterling will be 2:00 p.m. Friday, November 9, 2018, at the Hardtner Methodist Church with Pastor Margaret Johnson officiating. Interment will be in the Hardtner Cemetery under the direction of Marshall Funeral Home of Alva. Robert Edd Sterling, son of the late Edd L. and Helena (Bartz) Sterling, was born December 22, 1929, at Wichita, Kansas, and passed away November 4, 2018, at Alva, Oklahoma, at the age of 88 years 10 months, and 13 days. Robert grew up in Hardtner and graduated from Hardtner High School. He then obtained his Agronomy Degree from Kansas State University, where he was a member of the Alpha Gamma Rho Fraternity. While attending KSU, he met Janice Sue Wiley. They were married April 27, 1952, in El Dorado, Kansas. In 1951, Bob enlisted in the United States Army. After his enlistment was up, he reenlisted and another term, serving almost 4 years in the service with over two years serving in Germany. He was discharged as a 1st Lieutenant in 1955. After his discharge, Bob and Sue lived on the farm near Hardtner, where they raised their three children, Steven Edward, Sydney Sue, and Samuel Benson. He worked as a farmer/stockman most of his life. He also operated the Kiowa Sales Barn from 1968 until 1980. Yur Place was a very popular eating establishment in Hardtner where he was a famous breakfast cook for many years. He was a member of the American Legion, the Kansas Livestock Association, and Kiowa Masonic Lodge, Consistory, and he was also a Shriner. He served on the Hardtner School Board and the Hardtner Chamber of Commerce. Besides his parents, he was preceded in death by two sisters, one who died in infancy and, Erma McQuirk and her husband, Temple; one brother William (Bill) Sterling and his wife, Joyce; three nephews, Mike Sterling, Patrick Sterling, Mac Ewing; one niece, Sharon Sterling; and one great niece, Kim Barber. Robert is survived by his wife of 66 years, Sue Sterling; his children, Steve and wife, Joni, and Sydney; and Sam and wife, Shannon; six grandsons, Brandt Sterling and husband, Austin, of Oklahoma City, Austin and wife, Sarah, of Lakewood, Colorado, Jordan of San Francisco, California, Chance and fiance, Holly, of Philadelphia, Pennsylvania, Cash of Kansas City, Missouri, and Cayde of Manhattan, Kansas; four granddaughters, Darbi Hinde and husband, Daniel, of Alva, Justine Converse and husband, Chris, of Dallas, Texas, and Kena Sterling and Konli Sterling, both of Pratt, Kansas; two step grandchildren, Adison Smith and Garret Smith, both of Manhattan, Kansas; two great granddaughters, Savannah Sterling of Lakewood, Colorado, and Sawyer Hinde of Alva; two great grandsons, Charlie and Harrison Converse of Dallas, Texas; his niece, Anne Barber and husband, Ray, of Wichita, Kansas; his nephew, Burke Ewing and wife, Marilyn, of Amarillo, Texas; other relatives and friends. Memorial contributions may be made through the funeral home to Hardtner Methodist Church.

Funeral services for Robert Edd Sterling will be 2:00 p.m. Friday, November 9, 2018, at the Hardtner Methodist Church with Pastor Margaret Johnson officiating. Interment will be in the Hardtner Cemetery under the direction of Marshall Funeral... View Obituary & Service Information

The family of Robert Edd Sterling created this Life Tributes page to make it easy to share your memories.

Funeral services for Robert Edd Sterling will be 2:00 p.m. Friday,...

Send flowers to the Sterling family.