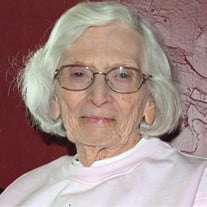 Funeral services for Roberta Mosser will be 2 p.m. Saturday, August 10, 2019, at the Cedar Grove Wesleyan Church with Doug Rawlings officiating. Interment will be in the Alva Municipal Cemetery under the direction of Marshall Funeral Home of Alva. Roberta Mae Mosser, daughter of the late Claude Allen and Melvina F. (Hilderbrand) Trimmell was born January 5, 1925, on a farm near Gray in Beaver County, Oklahoma, and passed away August 2, 2019, at Oklahoma City, Oklahoma, at the age of 94, 6months, and 27 days. Roberta, her parents, and sister, Leota, grew up during the Dust Bowl days. They had a good water well and always had a garden because of the good well. Roberta had good memories of her childhood although she grew up during a difficult period of history. Roberta attended Palestine Rural School and graduated from Hardesty High School. Roberta loved reading and learning new ideas. She always encouraged friends and family to get as much education at they could. Roberta taught school at Greenleaf School for one year. On December 11, 1943, she was united in marriage to Edward John Mosser, the love of her life, at Alva. They made their home on a farm in the Greenleaf Community where they took a lot of pride in the cattle they raised and the crops they produced. Roberta and Ed enjoyed their family especially their grandchildren who were the lights of their lives. Extended family was visited often. Roberta and Ed loved playing cards with their friends. Traveling was a very important part of their lives. Highlights of their travels were: The World Fair in Seattle Washington, visiting the National Parks in the west and their road trip with neighbors to Alaska. Roberta was a member of the Happy Hour Extension Club, the Cedar Grove Missionary Society and Garden Club. Roberta made many friends while in these groups. Roberta worked for several years for Weight Watchers as a trainer. She believed Weight Watchers was a very effective weight program. Roberta spent many hours visiting with friends and relatives. Besides her parents, she was preceded in death by her husband Edward John Mosser; son-in-law, Stanley Erikson; sister, Leota Ward and all of her sister-in-laws and brother-in-laws. Roberta and her niece Jo Mays (age 94) of California were the surviving family members of their generation. Roberta is survived by her daughter, Dorothy Lee Erikson of Alva; three grandchildren, Travis Erikson of Alva, Erick Erikson of Las Vegas, Nevada, and Vickie Hedge and husband, John, of Ponca City, Oklahoma; four great grandchildren, Taylor and Morgan Hedge, both of Ponca City, Ana Erikson of Alva and Ethan Erikson of Boulder City, Nevada; two special great grandchildren, Kolby and wife, Kelli Arnold, and Ashlei Arnold; four special great great grandchildren; two nephews, Dan Mosser and wife, Kathy, of Buda, Texas, and Allen McNaughton and wife, Becky, of Green Springs, California; two nieces, DeAnn Dunnihoo of Amarillo, Texas, and Francie Frysinger and husband, John, of Crown Point, Indiana; a number of nieces and nephews; and her special friends, Elaine Nighswonger and Bess Randals. Memorial contributions may be made through the funeral home to the Cherokee Strip Museum for maintenance on the Old Cedar Grove Church.

Funeral services for Roberta Mosser will be 2 p.m. Saturday, August 10, 2019, at the Cedar Grove Wesleyan Church with Doug Rawlings officiating. Interment will be in the Alva Municipal Cemetery under the direction of Marshall Funeral Home of... View Obituary & Service Information

The family of Roberta Mae Mosser created this Life Tributes page to make it easy to share your memories.

Funeral services for Roberta Mosser will be 2 p.m. Saturday,...

Send flowers to the Mosser family.