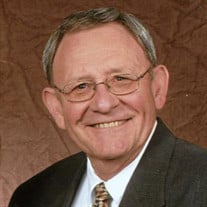 Graveside services for Rodney Ray Dunkin will be 11:00 a.m. Monday, October 12, 2020, at the Alva Municipal Cemetery. Memorial services will be 1:00 p.m. Monday, October 12, 2020, at the Alva First Christian Church (Disciples of Christ) with Pastor Drew Kirtley and Rev. Ron Pingleton officiating. Arrangements are under the direction of Marshall Funeral Home of Alva. At 2:30 p.m. there will be “A Tribute to the Love and Life of Rod Dunkin” at the Graceful Arts, 523 Barnes Street, Alva. *Masks are required at the Memorial service and at Graceful Arts.* Rodney Ray Dunkin, son of the late Ray E. Dunkin and Vaudith (Hensley) Dunkin, was born August 23, 1941, in Woodward, Oklahoma, and passed away in peace with his daughter by his side on October 5, 2020, at the age of 79 years , 1 month and 12 days. Rod moved to Tallent, Oklahoma, with his parents and later Barnsdall, Oklahoma, graduating from Barnsdall High School with the class of 1959. He graduated from Northwestern Oklahoma State University with a degree in Art. He went on to serve in the Armed Forces and was stationed in Okinawa, Japan. He was honorably discharged on July 22, 1968, with the National Defense Service Medal. Rod received a GI Bill, and completed his Master’s Degree in Psychology from Northwestern Oklahoma State University. He was united in marriage to Donna McNeil in 1970. Rod discovered his talent in 6th grade when he was given an assignment to draw the Anheuser- Busch eagle and aced that assignment, as he did his life. He taught art and coached the girl’s golf team with his colleague and friend, Steve Parkhurst, at Alva Senior High School for over 35 years. In May, 1985, he was united in marriage to Cecilia Kay Parkhurst in Alva. He later retired and worked at the Alva Wal Mart for 15 years with many friends and former students and taught art classes part time at Northwestern Oklahoma State University. He was a member of the First Christian Church (Disciples of Christ). He was an amazing and avid golfer and a member of the Alva Golf and Country Club. He participated with many winning teams in the Nescatunga Golf Tournament. His talent and passion as an artist created many beautiful, thoughtful paintings throughout the years. These included pen and ink drawings of historical landmarks in the Alva area, watercolors, and oils. He dabbled in creating pottery and jewelry with his influence being Taos and Santa Fe, New Mexico, and inspiration from nature. For many years he assisted his wife with catering social events around the Alva area. Besides his parents, he was preceded in death by his wife, Cecie. Rod is survived by his daughter, Kellie Dunkin, husband, Brett Lane and grandson, Cole Dunkin of Denver, Colorado, his son, Ryan Dunkin of Dallas, Texas, his cousins, Dennis Dunkin, wife Llew, Steve Dunkin, wife Mary, and David Dunkin, his step mother, Dortha Dunkin, and sisters Anne Place and Robyn Barkett and many other relatives and friends that he considered family. Memorial contributions may be made through the funeral home to the NWOSU Foundation, the Alva First Christian Church (Disciples of Christ), or to the Alva Goldbug Foundation (Checks must be made payable to CFO). The services will be broadcast live on the Marshall Funeral Home page on Facebook. Masks will be required in all services.

The family of Rodney Ray Dunkin created this Life Tributes page to make it easy to share your memories.

Graveside services for Rodney Ray Dunkin will be 11:00 a.m. Monday,...

Send flowers to the Dunkin family.