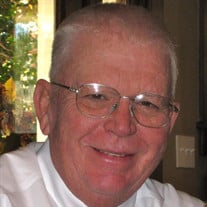 Funeral services for Roger Eugene Miller will be 10:00 a.m. Saturday, March 2, 2019, at the Alva Assembly of God Church with Rev. Cody Anderson, pastor of the Faith Center Fellowship in Meno, officiating. Interment will be in the Alva Municipal Cemetery under the direction of Marshall Funeral Home of Alva. Roger Eugene Miller, son of the late Edgar Eugene “Cub” and Ellen Merlene (Maphet) Miller, was born July 15, 1948, in Ashland, Kansas, and passed away February 27, 2019, at Alva, Oklahoma, at the age of 70 years, 7 months, and 12 days. Roger graduated from Alva High School with the Class of 1967. He served in the Oklahoma Army National Guard for 6 years. He attended college at NWOSU and Oklahoma State University. On August 15, 1970, he was united in marriage to Sharon Loa Anderson at the Alva Assembly of God Church. He was a diesel mechanic and worked for Devery Implement for 20 years. He then taught diesel mechanics at the High Plains Tech Center in Woodward, then was Transportation Director at the Alva Public Schools. He also farmed and did custom cutting. Roger attended the Assembly of God Church and was currently attending the Faith Center in Alva. He served as a member of the Board of the Cherokee Strip Museum. He enjoyed motorcycles, hot rods, and especially spending time with his grandkids, taking them to the airport to see the airplanes. Besides his parents, he was preceded in death by one sister, Norma Lee Miller; and one step grandchild, Amanda Zerkle. Roger is survived by his wife, Sharon Miller of Alva; his daughter, Kerri Stanfill and husband, Ed, of Moses Lake, Washington; his son, Randon Miller and wife, Kristi, of Alva; one sister, Rosalyn Newkirk and husband, Court, of Okmulgee; nine grandchildren, Olivia Carrell of Ellensburg, Washington, Eleni Carrell of Moses Lake, Washington, Taylor Castro and husband, Milton, of Midland, Texas, Hunter, Xander, Averie, Nickolas, Emma Kate, and Ashton Miller, all of Alva; four step grandchildren, Bo Zerkle, Kimber Conrad, Sara Prather, and Kyle Stanfill; four step great grandchildren; one step great-great-grandchild; other relatives and friends. Memorial contributions may be made through the funeral home to the Faith Center in Alva.

Funeral services for Roger Eugene Miller will be 10:00 a.m. Saturday, March 2, 2019, at the Alva Assembly of God Church with Rev. Cody Anderson, pastor of the Faith Center Fellowship in Meno, officiating. Interment will be in the Alva Municipal... View Obituary & Service Information

The family of Roger Eugene Miller created this Life Tributes page to make it easy to share your memories.

Funeral services for Roger Eugene Miller will be 10:00 a.m. Saturday,...