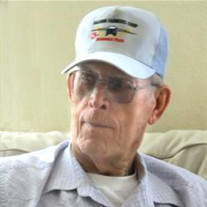 Funeral services for Roger Gene Zahorsky will be 1:00 p.m. Friday, July 11, 2014, at the Alva Wesleyan Church with Pastor John Smith officiating, under the direction of Marshall Funeral Home of Alva. Roger Gene Zahorsky, son of the late David Fred and Edith Elizabeth (McCoy) Zahorsky, was born May 31, 1931, southwest of Dacoma in Woods County, Oklahoma, and passed away July 8, 2014, at Alva, Oklahoma, at the age of 83 years, 1 month, and 8 days. Roger attended Greenvalley School and graduated from Dacoma High School. He was an excellent basketball player and accepted a scholarship to play basketball at Phillips University. He cut short his college education to join the United States Air Force. On March 7, 1954, he was united in marriage to Cordelia Ann Burleson at her parents home in Byron. They lived in Colorado Springs for 12 years where he delivered furniture for Peerless Furniture. In 1964, he returned to Dacoma to help his father on the farm. He worked many years as a custom cutter during the summer and a carpenter in the winter. He also drove a cattle truck along with his farming operation. He attended the Alva Wesleyan Church and was a Charter Member of the Dacoma Lions Club where he served many years as President. He enjoyed drinking coffee with his friends and attending the Old Time Bull Haulers reunions. Besides his parents, he was preceded in death by his brother, David Fred “Junior” Zahorsky. Roger is survived by his wife, Cordelia, of Dacoma; three daughters, Gaylene Friesen and husband, Rod, of Dodge City, Kansas, Arlene Cook of Woodward, and Anita Nusser and husband, Alan, of Alva; one son, William Zahorsky and wife, Stacy, of Alva; six brothers, Delbert Zahorsky of Enid, Don Zahorsky of Dacoma, Jim Zahorsky of Phoenix, Arizona, Darrell Zahorsky of Hutchinson, Kansas, Carroll Zahorsky of Kansas City, Missouri, and Stan Zahorsky and wife, Jan, of Minneapolis, Minnesota; and one sister, Marlene McLean and husband, Perry, of Overland Park, Missouri. Also surviving are 11 grandchildren, Lindsay Friesen of Kansas City, MiKeena Thompson and husband, Chad, Cody Cook, Liz Cook, Clint Cook, and Cierra Cook, all of Woodward, Loren Nusser and wife, Esther, of Alva, Whitney Nusser of Bartlesville, Christopher Zahorsky of Norman, Keaton Zahorsky of Norman, and Kristen Zahorsky of Alva; four great grandchildren, Jullian Cook, Gracie Thompson, Harmony Cook, and Ethan Nusser; other relatives and many friends. Memorial contributions may be made through the funeral home to the Oklahoma Medical Research Foundation for Diabetes research.

The family of Roger Gene Zahorsky created this Life Tributes page to make it easy to share your memories.

Funeral services for Roger Gene Zahorsky will be 1:00 p.m. Friday,...

Send flowers to the Zahorsky family.