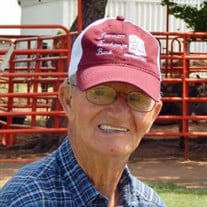 Funeral services for Ronald (Ron, Buddy) Brady will be Friday, March 24, 2017, with Reverend Ron Pingelton officiating. A public graveside service will be held at 10:00 a.m. at Alva Cemetery followed by an 11:00 a.m. memorial service at First Christian Church (Disciples of Christ), Alva, Oklahoma. Arrangements are under the direction of Marshall Funeral Home of Alva. Ronald Clay Brady, son of Ralph C. and Myrtle (Brown) Brady, was born December 25, 1931, on a farm in Alfalfa County, Oklahoma, and died March 18, 2017, at the age of 85 years, 2 months, and 21 days. He attended school at Shorts Springs, later graduating from Lambert High School. On August 2, 1952, Ronald married Barbara Ann Baltz. Shortly after their marriage, the couple moved to San Antonio, Texas, where Ronald served in the US Army. Upon his discharge, the couple returned to Oklahoma and settled on a farm west of Cherokee where they raised their three daughters, Ronda, LeAnn, and Becky, as Ronald worked in car sales in Cherokee, Oklahoma, and farmed with his father. In 1964, the family moved to a farm east of Alva. Ronald continued farming until his retirement in 2012. In 1976, the couple moved to their home in Alva, where Ronald resided until moving to Beadles Nursing Home in mid-February 2017. Ronald was a member of the First Christian Church where he served for years as a deacon. An extremely caring, generous, and humble man, Ronald encouraged and supported many friends and family throughout his life. With a smile, a hug, and a handshake, he warmed the hearts of many with his kindness and friendship. Fishing, attending Goldbug and Ranger basketball games, and sharing daily coffee with his “Ampride buddies” provided great happiness for him. Ronald was also actively involved in bingo at Beadles Nursing Home, helping set up and assisting residents. Ronald was preceded in death by his parents, Ralph and Myrtle; his wife, Barbara, in January 2017; four siblings, Maxine Pederson, Vera Mae Smith, Mary Ellen Watkins, Gayle Jones and their spouses. He is survived by his brother Larry (Nelda) Brady; three daughters, Ronda and Jim Martin of Newkirk, Oklahoma, LeAnn and Jennie Brady of Oklahoma City, Oklahoma, and Becky and Oswaldo Leon of Centennial, Colorado; nine grandchildren, Jill (Ryan), Jessica (Zachary), Amy (Aaron), Clayton (Amanda), Jordan (Dala), Evan (Lauren), Cori (James), Allison, and Anna; twelve great grandchildren; other relatives and a multitude of friends. Memorial contributions may be made through the funeral home to Beadles Nursing Home Activity Fund or First Christian Church Foyer Fund.

Funeral services for Ronald (Ron, Buddy) Brady will be Friday, March 24, 2017, with Reverend Ron Pingelton officiating. A public graveside service will be held at 10:00 a.m. at Alva Cemetery followed by an 11:00 a.m. memorial service at First... View Obituary & Service Information

The family of Ronald Clay Brady created this Life Tributes page to make it easy to share your memories.

Funeral services for Ronald (Ron, Buddy) Brady will be Friday,...

Send flowers to the Brady family.