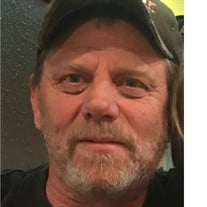 Ronald Wayne Wallace, son of the late Robert “Bob” Dean Wallace and Marilyn Louise (Taylor) Wallace, was born February 17, 1962, at Oklahoma City, and passed away June 27, 2019, near Dacoma, at the age of 57 years, 4 months, and 10 days. Ron attended school and graduated from Putnam City West High School in Oklahoma City. In his earlier years he was a musician and could play about any instrument. He was a member of the Love Baptist Church in Elmore City, Oklahoma. On May 5, 2013, he was united in marriage to Rebecca Lynne Carpenter in Elmore City. They made their home in Pauls Valley before moving to Dacoma where they have lived for the past year and a half. Ron enjoyed fishing and hunting and was a truck driver for Wheeler Brothers. He was preceded in death by his father, Robert “Bob” Wallace and his mother, Marilyn Van Gorder. Ron is survived by his wife, Rebecca Wallace of Dacoma; a son, Kris Wallace of Kentucky; two daughters, Jordan Wallace of Cherokee, and Krystal Carr of Dallas; one grandson; his stepmother, Sheila J. Wallace of Weatherford, Texas; three sisters, Teresa Earnest and husband, Dustin, of Alva, Mellisa Thweet and husband, Bill, of Weatherford, Texas, and Sherol Rumbaugh and husband, Jerry, of Junction City, Kansas; one grandson; many nieces and nephews; other relatives and friends. Remembrances may be shared with the family at www.marshallfuneralhomes.com.

The family of Ronald Wayne Wallace created this Life Tributes page to make it easy to share your memories.

Send flowers to the Wallace family.