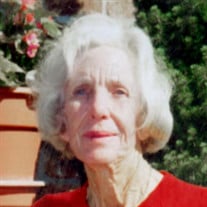 Rosary for Rosemary Bouziden will be 6:00 p.m. Tuesday, December 11, 2018 at the Marshall Funeral Home Chapel. Mass of Christian Burial for Rosemary will be 1:00 p.m. Wednesday, December 12, 2018, at the Sacred Heart Catholic Church with Father Father Bala Sagili Jesudas as the celebrant. Interment will be in the Sacred Heart Cemetery under the direction of Marshall Funeral Home of Alva. Rosemary Bouziden daughter of the late Albert Turner and Nina Marie (Craig) Davie, was born September 5, 1921, in Oakwood, Oklahoma, and passed away December 8, 2018, at Ashland, Kansas, at the age of 97 years, 3 months, and 3 days. Rosemary graduated as salutatorian of Oakwood High School with the Class of 1939. She attended Northwestern State College. On August 27, 1941, she was united in marriage to Solomon Bouziden, Jr. in Alva. They made their home in Alva where they farmed and ranched. She lived life to the fullest, being a housewife and homemaker who raised six kids. She built six houses, and made improvements on all of the ranches and properties they acquired. She was an active member of the Sacred Heart Catholic Church and the Altar Society. She was a Master Gardener, and canned many of the vegetables she grew. She enjoyed playing golf, and was a member of the Angel Fire Golf Association. She played competitive golf well into her 80's. Besides her parents and her husband, Sol Bouziden, she was preceded in death by one daughter, Roseann Kubicek; two sisters, Peggy Harper and Delores Kramer; and one grandson, Colby Bouziden. Rosemary is survived by three sons, Chris Bouziden and wife, Donna, of Alva, Dave Bouziden and wife, Carol, of Ashland, Kansas, and Steve Bouziden of Alva; two daughters, Nina Oakes of Onaga, Kansas, and Linda Lackey and husband, Rob, of Collinsville, Texas; one sister, Diana Harper and husband, Eston, of Coweta, Oklahoma, and one brother Craig Davie of Oakwood, Oklahoma. Also surviving are eight grandchildren, Karen Conrad and husband, Matt, of San Antonio, Rhett Bouziden and wife, Becky, of Ashland, Kansas, Leslie Buchanan and husband, Randall, of Derby, Kansas, Daniel Oakes and wife, Morgan, of Overland Park, Kansas, Brandon Oakes and wife, Theresa, of Overland Park, and Jonathan Oakes and wife, Hannah, of Overland Park, Clay Bouziden and wife, Kaitlin, of Alva; and Gage Bouziden of Weatherford; 21 great-grandchildren; other relatives and friends. Memorial contributions may be made through the funeral home to Sacred Heart Catholic Church.

Rosary for Rosemary Bouziden will be 6:00 p.m. Tuesday, December 11, 2018 at the Marshall Funeral Home Chapel. Mass of Christian Burial for Rosemary will be 1:00 p.m. Wednesday, December 12, 2018, at the Sacred Heart Catholic Church with Father... View Obituary & Service Information

The family of Rosemary Bouziden created this Life Tributes page to make it easy to share your memories.

Rosary for Rosemary Bouziden will be 6:00 p.m. Tuesday, December...

Send flowers to the Bouziden family.