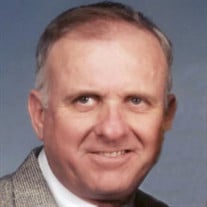 Graveside services for Samuel Elwood McCray will be 10:00 a.m. Wednesday, August 4, 2021, at the Waynoka Municipal Cemetery. Interment is under the direction of Marshall Funeral Home of Waynoka, LLC. Samuel Elwood McCray, son of Gerald Elwood and Beatrice Belva (Brown) McCray, was born August 16, 1944, in Alva, Oklahoma, and passed away July 27, 2021, on his farm east of Waynoka, at the age of 76 years, 11 months, and 11 days. Sam spent the first two years of his life at the farm he loved, and tragically lost his life in a farm accident at the farm he loved. Sam graduated from Waynoka High School and obtained his degree in Architecture at Northwestern State College. One of the buildings he designed was the Waynoka Church of God. On February 13, 1967, he was united in marriage to Lois Darlene Heiney in Clayton, New Mexico. He served in the United States Navy for 20 years, attaining the rank of Lt. Commander and earning a Bronze Star. He served in the United Nations while stationed in Beirut. After his retirement they moved to Corpus Christi and he served the U.S. Customs and Border Protecion, retiring after 14 years of service. Sam was a member of Waynoka Masonic Lodge #422. He loved the farm and moved back to northwest Oklahoma so he could enjoy his land. Besides his parents, he was preceded in death by his wife, Lois; and two sons, Chad McCray and Marc McCray. Sam is survived by two sisters, Ruth Anne Crusinbery of St. Louis, Missouri and Rosalie Curtis of Elsie, Nebraska; one brother, Arch McCray and wife, Charla, of Houston, Texas; his granddaughter, Alena McCray, of Idaho Springs, Colorado; other relatives and friends. Memorial contributions may be made in his memory to Duke University Brain Cancer Society.

Graveside services for Samuel Elwood McCray will be 10:00 a.m....

Send flowers to the McCray family.