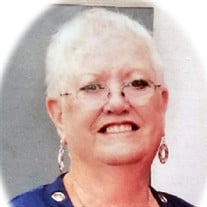 Private services for Sandra Lee Doman will be under the direction of Marshall Funeral Home of Alva. Sandra Lee Doman, daughter of the late Theron Audra and Fern (Smith) Chick, was born January 3, 1945, at Enid, Oklahoma, and passed away July 20, 2017, at Alva, Oklahoma, at the age of 72 years, 6 months, and 17 days. Sandra attended Alva High School. On September 7, 1962, she was united in marriage to Eldon Ray Doman at the Bible Baptist Church in Alva, Oklahoma. They lived in Douglas, Kansas, for about a year before moving to California. They returned to Alva in 1981 where they operated Eldon’s Body Shop. She was a member of the Bible Baptist Church. Her family was always the center of her life and she enjoyed spending time with her children, grandchildren, and great grandchildren. She also enjoyed gardening, reading, and traveling. Besides her parents, she was preceded in death by two brothers, John Chick and Theron Chick; and three sisters, Patricia Koehn, Cynthia Boaz, and Barbara Hurlbutt. Sandra is survived by her husband, Eldon, of Alva; two sons, Daniel Doman and wife, Nicole, of Rio Rancho, New Mexico, and Stephen Doman and wife, Lyn, of Wichita Falls, Texas; one daughter, Deliese Nusser and husband, Ronnie, of Wichita Falls, Texas; and two sisters, Judy Stewart of Alva, and Lucinda Miller and husband, Dean, of Pahrump, Nevada. Also surviving are eight grandchildren, Deidra Nusser Stewart and husband, Darron, of Whitehouse, Texas, Devin Nusser and wife, Whitney, of Fort Mill, South Carolina, Kurtis Doman, currently stationed in New Jersey, Courtney Doman, Madelynn Doman, and Evan Doman, all of Rio Rancho, New Mexico; Elizabeth Diefenbach and husband, Ricky, and Douglas Doman, all of Wichita Falls, Texas; four great grandchildren, Melina, Eddie, and Brody Stewart, and Porter Diefenbach; other relatives and friends and fur babies, Molly and Sticker. Memorial contributions may be made through the funeral home to the Bible Baptist Church. Remembrances may be shared with the family at www.marshallfuneralhomes.com.

Private services for Sandra Lee Doman will be under the direction of Marshall Funeral Home of Alva. Sandra Lee Doman, daughter of the late Theron Audra and Fern (Smith) Chick, was born January 3, 1945, at Enid, Oklahoma, and passed away July... View Obituary & Service Information

The family of Sandra Lee Doman created this Life Tributes page to make it easy to share your memories.

Private services for Sandra Lee Doman will be under the direction...

Send flowers to the Doman family.