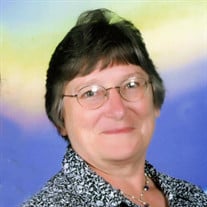 Funeral services for Sharon Ann Like will be 10:00 a.m. Monday, July 13, 2020, at the Elm and Murrow Church of Christ with Bill David Walker officiating. Interment will be in the Waynoka Municipal Cemetery under the direction of Marshall Funeral Home of Waynoka, LLC. Sharon Ann Like, daughter of the late James Dale and Sarah Hannah (Robinson) McNally, was born December 24, 1950, in Enid, Oklahoma, and passed away July 10, 2020, in Alva, Oklahoma, at the age of 69 years, 6 months, and 16 days. Sharon graduated from Waynoka High School with the Class of 1970. In school, she was active in FHA, 4-H, and Spanish Club. On August 20, 1971, she was united in marriage to David Walter Like in Waynoka. She worked in a convenience store and operated an in-home childcare service. She served as house parent at Albuquerque Christian Children’s Home from 1979 to 1981. She retired in 2007. She was a member of the Elm and Murrow Church of Christ. She also served as a 4-H leader. She greatly enjoyed her family, as well as traveling, quilting, and sewing. Besides her parents, she was preceded in death by one sister, Darlene Sue Like, one brother, Robert Dale McNally and one niece, Shereena Sue Montano. Sharon is survived by her husband, David, of Alva; James Walter Like and wife, Tammy, of Alva, Jacinda Perot and husband, Mike, of Waynoka, and Cathy Trujillo of Alva; seven grandchildren, Veronica Seidel and husband, Brady, of Pratt, Kansas, Drexyel Nelson, Kapri Like, Emry Like, Joey Trujillo, and Michael Martinez, all of Alva, and Robert Perot of Waynoka; one great-grandchild, Jet Wilder Seidel; her brother-in-law, Roscoe Like and wife, Enola, of Waynoka; her sister-in-law, Karen Tucker and husband, Mark, of Burlington; other relatives and friends. Memorial contributions may be made through the funeral home to the Lariat Creek Christian Camp.

Funeral services for Sharon Ann Like will be 10:00 a.m. Monday, July 13, 2020, at the Elm and Murrow Church of Christ with Bill David Walker officiating. Interment will be in the Waynoka Municipal Cemetery under the direction of Marshall Funeral... View Obituary & Service Information

The family of Sharon Ann Like created this Life Tributes page to make it easy to share your memories.