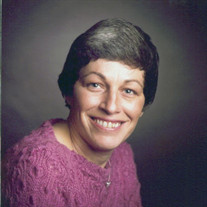 Memorial Services for Shirley Ann Wheat will be 11:00 a.m., Saturday, March 10, 2018, at Marshall Funeral Home Chapel, Alva, Oklahoma. Inurnment will be in the Alva Municipal Cemetery under the direction of Marshall Funeral Home of Alva. Shirley Ann Romano, the daughter of Josephine Romano, was born October 25, 1937, in Oakland, California and passed away February 9, 2018, in Hamilton, Montana. She was 80 years old. Shirley graduated from Lowell High School in San Francisco, California, in 1955. She was united in marriage to Charles Kenneth Wheat on January 5, 1957, in Oakland. She and Charles moved to Oklahoma in 1960, settling in Alva and then Tulsa before moving to Montana in 1977. Shirley excelled at everything she did. She was a chef, seamstress, hostess, designer, painter, quilter, gardener, animal lover, world traveler and friend. The one thing she was not, was average. She was a class act all the way. She was a longtime and honored member of the Bitterroot Quilters’ Guild, earning several ribbons with her quilts, and was an organizer of the Quilts 4 Kids program in the Bitterroot. She had a soft spot in her heart for any child suffering in any way. Besides her mother, she was preceded in death by her husband, Charles Wheat, in 2006, and her sister, Rose Mary Romano, in 2008. Shirley is survived by her brother, Lee Craig of Enid, OK; nephew Steven Craig of Enid, OK; two nieces, Kimberly Moore of Yantis, TX; and Chrystal Hamblin of Hunter, OK; several great nieces and nephews and 3 great-great nieces and nephew

The family of Shirley Ann Wheat created this Life Tributes page to make it easy to share your memories.

Send flowers to the Wheat family.