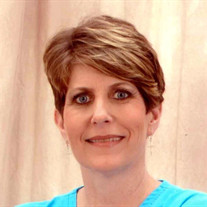 Funeral services for Staci Beth Wienecke will be 2:00 pm Thursday, February 16, 2017, at the Friends Church in Cherokee where she grew up in faith. She will be laid to rest in the Byron-Amorita Cemetery near the farm where she was raised under the direction of Marshall Funeral Home of Alva. Mrs. Staci Beth Wienecke, 53, passed from this life to join her savior and friend on February 8, 2017 in Columbia, SC. Born on July 29, 1963, in Kiowa, KS, she was the daughter of Edward S. Grover and Carole Tucker Grover. She was the beloved wife of Matthew Wienecke, her soul mate and “the best person I ever met”. They truly became one. She was the mother of Chandler and Colton Wienecke who were the main focus of her life. She loved raising them and teaching them about life and her strong faith in Christ. Staci grew up in Byron, Oklahoma. She attended elementary and Jr. High School at Burlington Public Schools and attended High School at Cherokee Public Schools. Staci played the flute for many years during her school years and played in the Oklahoma State University marching band her freshman year. She was also drum major for her high school her senior year. She was president of the State March of Dimes Youth Council. Because of exposure to the Mercy Hospital NICU in Oklahoma City during a March of Dimes activity she became interested in pursuing a career in nursing. She initially attended Oklahoma State University and was eventually a nursing graduate of the University of Oklahoma. Her love for children drew her into pediatric care, and she treasured her time as an NICU and newborn nursery nurse in Oklahoma City, Charleston, SC and later for a brief time before her illness with inflammatory breast cancer, at Palmetto Health Baptist in Columbia, SC. Staci’s enjoyment for gardening also led her to employment with Woodley’s Garden Center in Columbia. Her home served as both a beautiful garden and a refuge for the many pets that were welcomed into her life. She was unique, strong-spirited and faithful, with a wonderful sense of humor and a passion for life. Staci attests that her parents instilled in her an incredible work ethic that served her well her entire life. Many life lessons were learned while growing up on a farm. Watching the birth of a newborn calf as well as the death of a beloved pet taught her the circle of life. Faith and hope were learned by watching her daddy plant crop after crop with some years producing an abundant crop and some years a failure. But God always watched over her family and provided for their needs. Staci is survived by her husband of 27 years, Matthew Wienecke; daughter, Chandler Wienecke; son, Colton Wienecke; parents, Ed and Carole Grover; and brother, Barry Grover (Jenny); Also Surviving are nieces, Calli Grover Erickson and Whitney Grover; great niece, Addie Grover; great nephew, Julian Erickson; and her precious dog, Sugar. She was preceded in death by a brother, Brad, her grandparents, Cyril and Jettie Grover, Claudia and Alton Trotter, and Vern Tucker. Memorials may be made to Water of Life, PO Box 24151, Greenville, SC 29616; or to the Byron-Amorita Cemetery, c/o Pioneer Spirit Foundation, 68648 Latimer Rd. Burlington, Oklahoma, 73722.

Funeral services for Staci Beth Wienecke will be 2:00 pm Thursday, February 16, 2017, at the Friends Church in Cherokee where she grew up in faith. She will be laid to rest in the Byron-Amorita Cemetery near the farm where she was raised under... View Obituary & Service Information

The family of Staci Wienecke created this Life Tributes page to make it easy to share your memories.

Funeral services for Staci Beth Wienecke will be 2:00 pm Thursday,...

Send flowers to the Wienecke family.