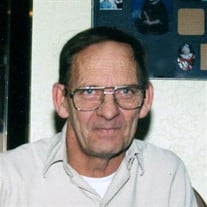 The memorial service for Steve Hansen will be 3:00 p.m. Wednesday, June 27, 2018, at the Marshall Funeral Home Chapel with Rev. Chuck Lightfoot officiating under the direction of Marshall Funeral Home of Alva. Stephen William Hansen, son of the late Ernest (Dutch) and Marie (Leatherman) Hansen, was born at the Alva General Hospital on March 12, 1944, and passed away June 23, 2018, at St. Anthony’s Hospital in Oklahoma City at the age of 74 years, 5 months, and 14 days. Steve graduated from Alva High School and attended Northwestern State University before joining the Air Force. After his discharge from the Air Force he worked in the construction industry and worked for Goodrich Plumbing for 25 years. He later worked in the maintenance department at Share Medical Center. Steve loved to bowl and was on a Alva bowling league for many years where he served as secretary. He even continued as secretary for several years after he no longer bowled on a league team. He enjoyed building and flying model airplanes. Besides his parents, he was preceded in death by his grandparents, Frank and Floy Leatherman. Steve is survived by his fiancé of twenty seven years, Violet “PeeWee” Smith, of Alva; step children, Ricky Smith and David Smith and his fiancé, Amber Pegg all of Alva; a brother, Jim Hansen, and wife, Christine, of Castle Rock, Colorado; a sister, Lois Lyon, and husband, Gene, of Bethany. Also surviving are his step-grandchildren, Joshua Johnson, and wife, Alyssa, Kaylea, Keaton, Drake, Taven Smith, and Vinnsinn Pegg; and one great granddaughter, Brooklynn Hansel; nieces, Gina Roy and husband, Dennis, and their children, Alex and Logan of Edmond, Jan Kinsey and husband, Chip, and their children, Kailen Kinsey, Jeremy Kinsey and wife, Reanna, and Delilah Kinsey; other relatives and friends. In lieu of flowers, memorial contributions can be made to a love fund in Steve’s memory through Marshall Funeral Home.

The family of Stephen William Hansen created this Life Tributes page to make it easy to share your memories.

The memorial service for Steve Hansen will be 3:00 p.m. Wednesday,...

Send flowers to the Hansen family.