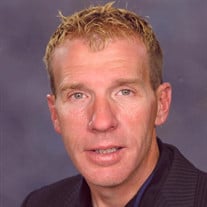 Funeral services for Stephen Scott Simmons will be 1:00 p.m. Friday, February 11, 2022, at the Marshall Funeral Home Chapel with Rev. Leon Veazey officiating. Interment will be in the Memorial Hill Cemetery under the direction of Marshall Funeral Home of Alva. There will be a visitation with the family from 5:30 p.m. to 6:30 p.m. Thursday. Stephen Scott Simmons, son of the late Robert Jake “Bob” and Donna Lee (Settle) Simmons, was born May 31, 1968, in Warner Robins, Georgia, and passed away February 5, 2022, in Enid, Oklahoma, at the age of 53 years, eight months, and four days. Stephen graduated from high school in Ramona, Oklahoma, then received his bachelor’s degree in Business Administration at Oklahoma State University. In December 1990, he was united in marriage to Jana Evans in Ramona. He lived in Enid, where he owned and operated Curb Appeal, a landscape service. Landscaping was his true passion. If he were an artist, flowers and plants were his palettes. He took pride in his ability to transform an empty “canvas” into a work of art. He kept the landscapes of Enid, OK, looking beautiful year-round. Growing up, Stephen had close relationships with all his cousins. His closest cousin, Angela Pearson, said that as a kid. When he would arrive at his Aunt Louise and Uncle Everette’s house, he did laps around the place, excited to see his family. He enjoyed his family and spending time with them. Stephen also enjoyed hunting and fishing. He especially enjoyed these activities with his father, the late Bob Simmons. Just like his parents. He was a lover of all animals, especially dogs and cats. During the last few years, he found comfort in “his girls,” Roxi a corgi, and Rita, a dachshund. Along with his passion for landscape and animals, he was an enormous Oklahoma State University fan. He was continuously proud of his alma mater He was a member of the First United Methodist Church in Enid. He was an avid reader of the Bible. His knowledge was immense. His wisdom of the Bible could rival the smartest of theologians. He was well-versed in the Bible and carried out those scriptures in the way that he treated those around him. He has a huge heart for animals and people. He was the type of guy to give the shirt off his back. He is preceded in death by his parents, Robert and Donna Simmons. Grandparents Claude and Vernie Simmons, and Leroy and Grace Settle. As well as numerous aunts, uncles, and cousins. Survivors include Aunts Karen and Sue Settle, both of Enid; Junior and Margie Simmons of Enid; Paul Simmons of Waynoka; numerous cousins and friends. The family requests that memorial contributions be made to Creature Concerns in lieu of flowers.

Funeral services for Stephen Scott Simmons will be 1:00 p.m. Friday, February 11, 2022, at the Marshall Funeral Home Chapel with Rev. Leon Veazey officiating. Interment will be in the Memorial Hill Cemetery under the direction of Marshall Funeral... View Obituary & Service Information

Funeral services for Stephen Scott Simmons will be 1:00 p.m....

Send flowers to the Simmons family.