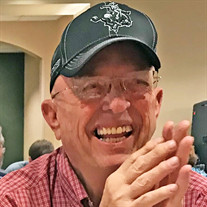 Memorial services for Steven Ray Hannaford will be 11:00 a.m. Friday, March 15, 2019, at the Sacred Heart Catholic Church with Father Bala officiating. Inurnment will follow in the Sacred Heart Cemetery. Steve was cremated at his request under the direction of Marshall Funeral Home of Alva. Steven Ray Hannaford, son of the late Wayne and Matilda (Resler) Hannaford, was born September 15, 1947, in Alva, Oklahoma, and passed away March 9, 2019, in Oklahoma City, Oklahoma, at the age of 71 years, 5 months, and 22 days. Steve graduated from Alva High School with the Class of ‘65, then obtained his Bachelor’s Degree in Business Administration from NWOSU. He sold cars at Washburn Motor Company and Mark Ream Motors for many years. After two years of retirement, he then went to work at Wal-Mart. Steve attended Sacred Heart Catholic Church. He was an avid NWOSU Ranger fan, doing whatever he could to support the Rangers, including selling Ranger cards and homecoming buttons, and working on the scholarship drive. He was also very active in the Jaycees, including serving as President in 1977-78 and was instrumental in helping with the Fourth of July festivities and fireworks show. He was awarded a lifetime membership as a Governor in the Jaycees. He loved playing cards and enjoyed bowling. Besides his parents, he was preceded in death by two brothers, Roger and Jim. Steve is survived by his wife, Brenda, of Alva; his son, Chris Hannaford and wife, Tracy, of Mustang; his daughter, Kecia Smith of Los Lunas, New Mexico; six grandchildren, Tanner Smith and wife, Ari, of Los Lunas, New Mexico, Ciara Dickerson and husband, Royce, of Grants, New Mexico, Logan Smith of Los Lunas, New Mexico, Devon Hannaford of Boston, Massachusetts, Dustin Hannaford of Mustang, and Dillon Hannaford of Mustang; eight great-grandchildren, Odin and Liam Smith, Emily and Lindsey Dickerson, and Skylar, Tatum, Kinsley, and Madison Hannaford; other relatives and friends. Memorial contributions may be made through the funeral home to the NWOSU Athletic Department.

Memorial services for Steven Ray Hannaford will be 11:00 a.m. Friday, March 15, 2019, at the Sacred Heart Catholic Church with Father Bala officiating. Inurnment will follow in the Sacred Heart Cemetery. Steve was cremated at his request under... View Obituary & Service Information

The family of Steven Ray Hannaford created this Life Tributes page to make it easy to share your memories.

Memorial services for Steven Ray Hannaford will be 11:00 a.m....

Send flowers to the Hannaford family.