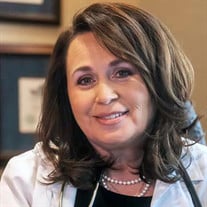 Private graveside services for Dr. Susan (Susie) Marie Hull will be in the Waynoka Municipal Cemetery under the direction of Marshall Funeral Home of Waynoka, LLC. The family will host a memorial service at their home 2:00 p.m. Saturday, September 19, 2020. Dr. Susan (Susie) Marie Hull, daughter of the late Raymond Alfred and Esther Lorean (Garhart) Moore, was born June 5, 1961, in Pasco, Washington, and passed away September 9, 2020, in Wichita, Kansas, at the age of 59 years, 3 months, and 4 days. Growing up in rural Wyoming, she was the 6th of 15 children. Eventually, she was forced to quit school at an early age to help support herself and her family. She later earned her GED and became the first female Certified Mechanic from the Southeast Community College at Milford, Nebraska in 1982. She excelled in her profession and worked on many different things, including racecar engines. With her passion to make things better, she changed professions and began her journey working on ranches and doctoring cattle. On August 3, 1996, she was united in marriage to Dwight Hull at Waynoka. For a time, she worked as a CNA and Pharmacy Tech. She then attended Northwestern Oklahoma State University where she obtained her Bachelor’s Degree in Biology and Chemistry. She was then accepted into Medical School at the University of Kansas where she graduated in 2008. She completed her Internal Medicine Residency in Wichita in 2011. In 2012, she opened The Medical Clinic in Waynoka with a desire to have a more personal connection with her patients and be in a rural community. Susan had a heart for community service and was involved in many philanthropic endeavors. She was very active in the Oklahoma State Medical Association where she served as Rural Chairman, among many other positions. She was also a member of OHCE, AAUW, American Medical Women’s Association and the National Physicians Council. She was the presiding state president of American Association of University Women. She attended the Waynoka First United Methodist Church where she was a member of the United Methodist Women. Susan is survived by her husband, Dwight Hull of Waynoka; one son, Sage Cook and wife, Megan, of Waldron, Kansas; two daughters, Hannah Kimbro and husband, Dal, of Waynoka, and Kelsey Hull of Oklahoma City; two grandchildren, Gavin and Carver; other relatives and many friends. In lieu of flowers, memorial contributions may be made through the funeral home to the NWOSU Foundation for the Science Department, the Foundation which was influential towards her becoming a medical doctor.

Private graveside services for Dr. Susan (Susie) Marie Hull will be in the Waynoka Municipal Cemetery under the direction of Marshall Funeral Home of Waynoka, LLC. The family will host a memorial service at their home 2:00 p.m. Saturday, September... View Obituary & Service Information

The family of Dr. Susan Marie Hull created this Life Tributes page to make it easy to share your memories.

Send flowers to the Hull family.