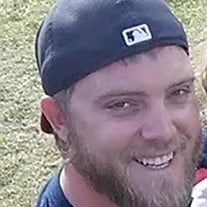 Funeral services for Tayler Wade Bradford will be at 3:00 p.m. Friday, February 5, 2021 at Waynoka Public School multipurpose building with minister Bill David Walker and Curan Olson officiating. Interment will be in the Waynoka Municipal Cemetery under the direction of Marshall Funeral Home of Waynoka LLC. The services will be live streamed on the Marshall Funeral Home Facebook page. Tayler Was born on March 19, 1992 in Woodward, Oklahoma to Troy Wade and Cindy Renee Black Bradford of Waynoka. He tragically left this world on January 29, 2021 while heroically doing what he loved. Tayler was a very active child who loved riding the bus to his Papa and grandmas after school every day. He always had a love for all sports but track was a favorite. He attended the state track meet all four years of high school and was proud to hold the school record for long jump and being tied for high jump. He even briefly ventured into showing livestock. No matter what Tayler was doing, there was always a fan club to cheer him on. Later in life Tayler had many hobbies including jeeping, racing, and being an Aquarist. He enjoyed watching all the Railroaders that followed him and all the sports and show rings they participated in. Tayler was joined in marriage with Clair Elyssa Cole on October 11, 2014. Together they had two little boys and enjoyed their lives here in Waynoka. Tayler is survived by his wife Clair; his sons, Rycen Wade and Maverick Layne Bradford of Waynoka; his parents, Troy and Cindy Bradford of Waynoka; sister, Ashley Esparza and her husband, Jason; niece, Maisyn of Blanchard Oklahoma; sister-in-law, Kara Durkee and her husband, Jeremy; nephew and niece Hunter and Jorja all of Waynoka; honorary sister and family friend, Monica Shepard and her husband, Dusty, and their son, Kyler, of Waynoka; other relatives and many friends. He was preceded in death by his paternal grandparents Junior and Irona (Cruze) Bradford; maternal grandparents, W.O. and Bobbie (Brownlow) Black; aunts, Mary Rohla and Brenda Marsalis; and uncle, Richard Bradford. A love fund has been set up at CoreBank of Waynoka.

Funeral services for Tayler Wade Bradford will be at 3:00 p.m....

Send flowers to the Bradford family.