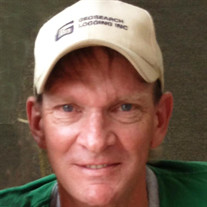 Memorial services for Terry Lee Hodgson will be 10:00 a.m. Monday, August 31, 2020, at the Marshall Funeral Home Chapel. The cremains will be interred in the Short Springs Cemetery under the direction of Marshall Funeral Home of Alva. Terry Lee Hodgson, son of Ronald Orie and Joquietta Ann (Walker) Hodgson, was born October 15, 1960, and passed away August 25, 2020, at the age of 59 years, 10 months, and 10 days. Terry graduated from Cherokee High School and attended Northwestern Oklahoma State University. He enlisted in the United States Navy in 1987-1993 as a mineman and EOD technician, serving 6 years. After touring all over the world, including Scotland, Italy, and the Philippines, Terry settled in the oil field where he devoted 30 years of his life’s work. On February 29, 2004, he was united in marriage to Karin Lei Farley in Cherokee, Oklahoma. He was employed by the City of Alva until his death. If you had the honor of knowing Terry, you would know that he loved his family fiercely. There was never a doubt of his pride in his daughter Stormee and his love for his granddaughter Braxi. Terry had a passion for cars and motorcycles. As a young boy, Terry was enthusiastic, loved the outdoors and was the peacemaker for his brothers and sister. He had a heart of gold. Terry was the guy that embraced his loved ones with a hug. He would do anything for anybody before himself. We know and find comfort that he was greeted in Heaven with open arms. We know he is watching over us and will continue to guide us from above. Terry is survived by his wife, Karin, of Alva; one daughter, Stormee Gaither and husband, Chance, of Waukomis; his parents, Ronald and Joquietta Hodgson; two brothers, Rick Hodgson and wife, Annette, of Inola, and Kevin Hodgson and wife, Teresa, of Cherokee; one sister, Rhonda Mast and husband, Dennis, of Cherokee; one grandchild, Braxi Sharp of Waukomis; two step-sons from a previous marriage, Kyle Hungerford of Helena, and Kory Hungerford of Colorado; and numerous nieces and nephews. Memorial contributions may be made through the funeral home to the Wounded Warrior Project and the W.O.O.F. Pet Rescue Society.

The family of Terry Lee Hodgson created this Life Tributes page to make it easy to share your memories.

Send flowers to the Hodgson family.