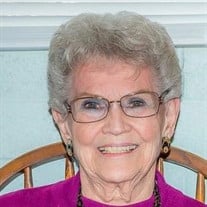 Funeral services for Thelma Mae Secrest will be 10:30 a.m. Tuesday, July 31, 2018, at the Waynoka Church of Christ with Bill David Walker officiating. Internment will be in the Waynoka Cemetery under the direction of Marshall Funeral Home of Waynoka. Thelma Mae Secrest, daughter of the late Raymond and Mary Otice (Odell) Foote, was born February 27, 1930, in Laverne, Oklahoma and passed away July 27, 2018, in Oklahoma City at the age of 88 years and five months. Thelma attended school at Laverne Grade School and Laverne High School, and worked as a Medical Assistant for many years. She was united in marriage to James L. Secrest at Ashland, Kansas. They made their home at Rosston and Laverne, Oklahoma and Hutchinson, Kansas. They traveled for several years on the railroad before moving to Waynoka where Jim worked for The Santa Fe Railroad until his retirement. At that time they moved to Kimberling City, Missouri, and worked at Silver Dollar City for four years before returning to Waynoka. Jim and Thelma celebrated their 65th anniversary a few months before his death on October 3, 2011. Thelma was a faithful member of the Waynoka Church of Christ and enjoyed attending the College Hill Church of Christ the last year after she moved to the Homestead in Alva. She was also a member of En Avant Sorosis Sorority. Thelma loved cooking and sewing and spending time with her large family. Besides her parents, she was preceded in death by her husband, James; daughter Gayle; daughter-in-law Jo; two sisters, Viola Foote and Selia Holcomb; and three brothers, Wayne Foote, William Foote, and Norman Foote. She is survived by four sons, Jimmie of Ardmore, Bill and wife, Debbie, of Seiling, Dan and wife, Kelly, of Windsor, Colorado, and Larry and wife, Jill, of Stillwater; fourteen grand children; twenty six great-grand children; two sisters, Dorthy Smith of Woodward, and Christina Aylett and husband, Bud, of The Woodlands, Texas; one son-in-law, Bobby Sutherland of Enid; other relatives, and many friends. Memorial contributions may be made to the Church of Christ Mission fund or to the Local EMS Chapter.

Funeral services for Thelma Mae Secrest will be 10:30 a.m. Tuesday, July 31, 2018, at the Waynoka Church of Christ with Bill David Walker officiating. Internment will be in the Waynoka Cemetery under the direction of Marshall Funeral Home of... View Obituary & Service Information

The family of Thelma Mae Secrest created this Life Tributes page to make it easy to share your memories.

Funeral services for Thelma Mae Secrest will be 10:30 a.m. Tuesday,...

Send flowers to the Secrest family.