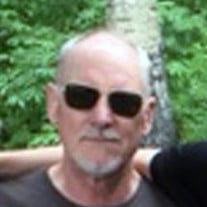 Memorial services for Theodore Robinson, Jr. will be 2:00 p.m. Saturday, April 16, 2016, at the Alva Church of the Nazarene with Rev. William S. Kalfas officiating. His request was to be cremated and services are under the direction of Marshall Funeral Home of Alva. Theodore George Robinson, Jr., son of the late Theodore George Robinson and Carolyn (Camper) Brown, was born March 31, 1956, in Atlanta, Georgia, and passed away April 6, 2016, in Oklahoma City, Oklahoma, at the age of 60 years and 6 days. Ted graduated from Sharpstown High School in Houston and attended the University of Houston. He worked in the oilfield as a directional driller where he traveled the world before beginning his food service career. In May 1993 Ted was united in marriage to Leah Henderson in Nashville, Tennessee. The food service profession took them to many states until they settled in the Alva area where he has been the Food Service Director at NWOSU since 2002. Ted was a member of the Alva Church of the Nazarene, Kiwanis, Friends of the NRA, and the Rocky Mountain Elk Foundation. He enjoyed fly fishing, hunting, and music. Ted was preceded in death by his father, Ted Robinson, and his step-father, Robert Brown. He is survived by one son, Theodore George “Trey” Robinson III, of Pratt, Kansas; one daughter, Taylor Robinson, of Salina, Kansas; and their mother, Leah Robinson, of Pratt, Kansas; his mother, Carolyn Brown, of Midland, Texas; two brothers, Doug Robinson and his wife, Mary Lou, of Benton, Arkansas, Kent Brown and his wife, Monea, of Midland, Texas; two nieces, Kelsey Robinson and Lauren Jones and her husband, Kurt; two nephews, Alex and Aaron Brown ; other relatives and friends. Ted is also survived by his Golden Retriever, Ginnie. In lieu of flowers, memorial contributions may be made through the funeral home to the Salt Fork Chapter of Friends of the NRA.

Memorial services for Theodore Robinson, Jr. will be 2:00 p.m. Saturday, April 16, 2016, at the Alva Church of the Nazarene with Rev. William S. Kalfas officiating. His request was to be cremated and services are under the direction of Marshall... View Obituary & Service Information

The family of Theodore "Ted" George Robinson created this Life Tributes page to make it easy to share your memories.