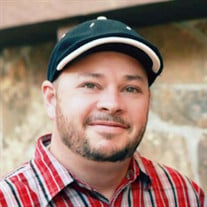 Tommy Joe Sanborn II of Alva, OK, passed away in his home, surrounded by his family, on Friday, November 12, 2021, at the age of 51, after a hard-fought battle with cancer. His year-and-a-half-long fight showed his courage in facing life's challenges with grit and determination. Despite the pain, Tommy came out a hero and stayed strong until the end. On July 16, 1970, he was born to Bobbie Ann Sanborn (née Simon) in Kiowa, KS. Tommy was the oldest of he and his sister Tonya, and the kids grew up in both the Cherokee and Jet, OK, areas. During Tommy's teenage years, he moved to Alva, where he graduated a Goldbug. As an adult, Tommy's first marriage produced two children, Gage Alexander and Katelin Rose. The kids were his pride and joy, and he loved spending every moment he could with them. The three lived in Enid, where Tommy met and got engaged to Stacy, later whom he would marry. For a few years, Tommy, Stacy, and the kids lived in Arlington, TX, making memories attending Texas Rangers baseball games, putt-putt golfing, bowling, and going to amusement parks and zoos. There was a designated family game night every week, as well as frequent movie and popcorn nights. Playing badminton became a family favorite too, and Tommy prided himself on taking the W quite often. While in Texas, Tommy became a father of three when he and Stacy welcomed daughter Sydney Grace to the family. Shortly after the birth, changes in circumstances brought the couple and their new baby back to Oklahoma, where later a fourth child, Jagger Evan Thomas, was born. They made their home in Alva, where Tommy worked at Alva Monument until his illness. Family was everything to Tommy, and his most significant accomplishment in life was being a dad. He was big-hearted, loyal, and believed in second chances. He loved to cook and would awe his family with his culinary skills. In the fall, you could find Tommy tuned in to Sooner football every Saturday. He inherited his love for the program from his late grandmother and late mother. Tommy is survived by his wife Stacy; children Gage, Katelin, Sydney, and Jagger; father Larry Failes; grandfather Doug Kranz; sister Tonya Tullis, half-sisters Jennifer Hackler, and Amantha and Rebecca Sanborn; aunt Dana Franklin, uncles Steve Simon (Jackie) and Robert “Bob” Sanborn; nieces Jadyn and Keyauna Heidrick, great-nephew Cayden Reed, and several cousins. Preceding him in death are his mom Bobbie Failes and grandmother Wilma (Fern) Kranz. A memorial service will be held at Marshall Funeral Home in Alva on Friday, November 19, 2021, at 2 pm with Max Ridgway of Grace and Faith Fellowship Church officiating. In lieu of flowers, contributions to a Love Fund for the family may be made through the funeral home. Please no plants or flowers.

Tommy Joe Sanborn II of Alva, OK, passed away in his home, surrounded by his family, on Friday, November 12, 2021, at the age of 51, after a hard-fought battle with cancer. His year-and-a-half-long fight showed his courage in facing life's challenges... View Obituary & Service Information

Tommy Joe Sanborn II of Alva, OK, passed away in his home, surrounded...

Send flowers to the Sanborn family.