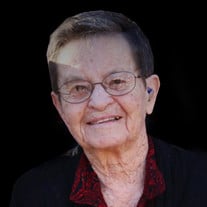 Funeral services for Treva Sue Martin will be 1:00 p.m. Monday, December 9, 2019, at the Hopeton Wesleyan Church with Pastor Marion Hadsell officiating. Interment will be in the Alva Municipal Cemetery under the direction of Marshall Funeral Home of Alva. Treva Sue Martin, daughter of Archie Lee and Ruth Elizabeth (Parsons) Long, was born August 18, 1934, at Alva General Hospital. She passed away December 5, 2019, at Alva, at the age of 85 years, 3 months, and 17 days. Sue attended Farry School and graduated with the Class of 1953. She enjoyed playing basketball and softball. On December 18, 1968, she married Wesley Gene “Bud” Martin. She had a wonderful marriage and enjoyed life on the farm beside him working the land, taking care of cattle, raising chickens and enjoying a garden. She enjoyed the outdoors and had a particular appreciation and understanding of both the farm animals and the wildlife around the farm. She enjoyed a good game of dominos and cards with family and friends. They also enjoyed hunting arrowheads and traveling various places to hunt for rocks. They spent several winters in New Mexico where they enjoyed the company of other snowbird campers, playing games, sharing stories and looking for unusual rocks. Everywhere Bud went, she was seen by his side. They enjoyed going to different music events and she enjoyed playing the guitar and keyboard and singing in a band at different events in the area and going to rest homes to play music. Her beloved husband, Bud Martin, passed away March 7, 2012. Bud and Sue had moved in with Elwyn and Evelyn in November of 2011 when he became so ill. She continued living with Elwyn and Evelyn until her health failed in June of 2018. For the last year and a half, she lived at Beadles Nursing Home where she was an avid Bingo player and Thunder game enthusiast and watched every game. Before her health failed, she had the privilege to attend a Thunder game which she enjoyed immensely. Besides her parents and her husband, Bud, Sue was preceded in death by her son-in-law, David Shearer. Sue is survived by her daughters, Pat Shearer from Tulsa, Evelyn Hofen and husband, Elwyn, of Alva; and her grandchildren that she loved so much, Brian and Lynn Hofen of Alva, Brent and Heather Hofen of Portland, Oregon, and Brad and Ruchita Hofen of Nagpur, India. She is also survived by her great grandchildren that she was so proud of, Braden, Brooks, and Madison Hofen of Alva, Emma, Blake and Lauren Hofen of Portland, Oregon, and Cassia and Candace Hofen of Nagpur, India; a number of nieces and nephews; other relatives and friends. Memorial contributions may be made through the funeral home to the Hopeton Wesleyan Church building fund.

Funeral services for Treva Sue Martin will be 1:00 p.m. Monday, December 9, 2019, at the Hopeton Wesleyan Church with Pastor Marion Hadsell officiating. Interment will be in the Alva Municipal Cemetery under the direction of Marshall Funeral... View Obituary & Service Information

The family of Treva Sue Martin created this Life Tributes page to make it easy to share your memories.