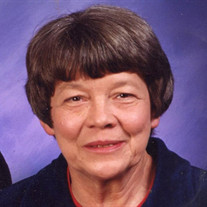 Funeral services for Twyla Jean Lancaster will be 2:00 p.m. Monday, February 10, 2020, at the Alva Church of the Nazarene with Rev. Bill Kalfas, Rev. Bob Brown, and Pastor Brady Marston officiating. Interment will be in the Alva Municipal Cemetery under the direction of Marshall Funeral Home of Alva. There will be a visitation with the family at the funeral home Sunday, February 9, 2020, from 5:30 to 7:00 p.m. Twyla Jean Lancaster, daughter of the late Kenneth William and Donna Ivalene (Johnson) Marmon, was born September 16, 1942, in Wichita, Kansas, and passed away February 7, 2020 in Enid, Oklahoma, at the age of 77 years, 4 months, and 21 days. Twyla graduated from Louisburg High School with the Class of 1960. Right after graduation, she was united in marriage to Fred Obermeier and together they were blessed with five children. She worked for the IRS in Kansas City several years. On June 24, 1976, she was united in marriage to Norman Lancaster in Louisburg, Kansas, and his two children became her own. They lived in Emporia, Kansas before moving to Alva, Oklahoma, in 1980. She loved taking care of children and provided care for many children in her home for many years. She was a member of the Alva Church of the Nazarene and later attended the Church of God. She was a member of Beta Sigma Phi and the Red Hat Society. She enjoyed antiquing, collecting chickens and working crossword puzzles. Most of all, she was a loving and devoted grandmother, and attended every activity she could. Besides her parents, she was preceded in death by one brother, Kenneth Lee Marmon; one sister, Helen Rose; and two grandchildren, Colby Bouziden and Trevor Martin. Twyla is survived by her husband, Norm; two sons, Richard “Rick” Obermeier of Paola, Kansas, and Randy Lancaster of Fort Smith, Arkansas; five daughters, Rhonda Thompson and husband, Scott, of Vian, Oklahoma, Donna Bouziden and husband, Chris, of Alva; Debbie Boyers and husband, Mike, of Paradise, Texas, Diane McAlpin and husband, Jeff, of Alva, and Darcie Obermeier of Alva; three brothers, David Marmon of Louisburg, Kansas, Dick Cook of St. Joseph, Missouri, and Victor Cook and wife, Chris, of Gulf Breeze, Florida; two sisters, Linda Kircher and husband, Paul, of Olathe Kansas, and Judith Glenn and husband, Don, of Raymond, Mississippi; 15 grandchildren; 7 great grandchildren; other relatives and friends. She is also survived by many others to whom she provided childcare through the years that she considered as children and grandchildren. The family requests that in lieu of flowers, memorial contributions may be made through the funeral home to Lakemary Center in Paola, Kansas or the charity of your choice.

Funeral services for Twyla Jean Lancaster will be 2:00 p.m. Monday, February 10, 2020, at the Alva Church of the Nazarene with Rev. Bill Kalfas, Rev. Bob Brown, and Pastor Brady Marston officiating. Interment will be in the Alva Municipal Cemetery... View Obituary & Service Information

The family of Twyla Jean Lancaster created this Life Tributes page to make it easy to share your memories.

Funeral services for Twyla Jean Lancaster will be 2:00 p.m. Monday,...

Send flowers to the Lancaster family.