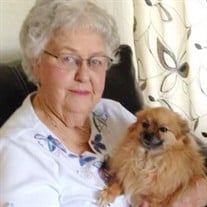 Graveside services for Vera Ferguson will be 2:00 pm Sunday, February 13, 2022, at the Freedom Cemetery with Rev. Mark Kinkel officiating. Arrangements are under the direction of Marshall Funeral Home. Vera Marie Culver was born July 16, 1926, in Cloverdale, California, to Clarence and Jennie (Arndt) Culver and passed away February 10, 2022, at Alva, Oklahoma, at the age of 95 years, 7 months, and 24 days. After her family moved to Freedom, Vera started school at Houston Valley north of town. Soon she was smitten by Harold Ferguson. They were married January 25, 1943, in Buffalo, Oklahoma, and were blessed with three sons, Rod, Hal, and Mick. Harold and Vera farmed and ranched on their land in Woods County, north of Freedom. She later owned and operated the Corner Grocery for many years where she loved meeting and visiting with people. Besides her parents, Vera was preceded in death by her sweetheart of 69 years, Harold; her son, Mick; and her sister, Ina Sylvester. Family was everything to Vera and she is survived by sisters, Faye Hope and Wanda Reed; brother, Ron Culver and his wife, Carlene; a sister-in-law, Jo Sanders and her husband, Vernon; son Rod and his wife, Lois, son Hal and his wife, Laura, and daughter-in-law, Debbie. Also surviving are grandchildren, Tyler and Christi Ferguson, Kendra and Charles Bleam, Cortney and Bobby Gainer, Amber Graff, Chelsea and Kevin White, Cody and Julie Ferguson, Kara Hensley and fiancé, Randy Owens, Devin Ferguson, Stanley and Amanda Irving, and Bradley Irving and Jason Gray; great grandchildren, Samantha and Cade, Alona and Matthew, Nathan, Kobe and Vanessa, Desa and Garrett, Micah, Abby, Travis, Kenzie, Kyler, Kaden, Austin, Alec, Bratton, Wade, Eli, Emeri, and Halle; many other relatives and friends. Memorial contributions may be made through the funeral home to the Freedom Cemetery.

The family of Vera Marie Ferguson created this Life Tributes page to make it easy to share your memories.

Graveside services for Vera Ferguson will be 2:00 pm Sunday,...

Send flowers to the Ferguson family.