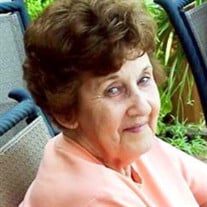 Vera Nadine Straw, 98, passed peacefully of natural causes at the Share Convalescent Home on Tuesday, February 2, 2021. Vera was born on October 25, 1922, in Wichita, Kansas, to Weldon Peoples and Evelyn Rickman. She was raised by her grandparents, John and ElDora Rickman, in Alva, attending school and graduating from Alva High School. Vera was married to Rex Cunningham and to their marriage four children were born, Walter, Randy, Vicki and Rick. Vera was a stay-at-home mom until the children got older. She then worked at the Montgomery Ward store and later at the Woods County Clerk’s Office, where she worked for years for Carl Hartwig. Her interests were bowling, gardening and her friends (especially the Red Hat Club) and family. She also loved watching the OU Sooners, especially in football, and the OKC Thunder. Vera was a loving mother, grandmother and great grandmother and always had a quick wit and smile for everyone. Vera met Chester Straw at a dance, and he swept her off her feet. Together, they enjoyed Saturday nights at the VIP Club dancing and eating. They were married on November 5, 1968, and lived on a farm north of Cherokee, Oklahoma, until they sold the farm and moved into town. Vera loved to bowl and especially enjoyed traveling with her bowling team friends. She loved her friends and the simple life of a small town. Vera is survived by her daughter Vicki Ann of McLoud, Oklahoma, Rick and wife Janet Cunningham of Alva, grandsons Brett and wife Kasey Cunningham of Edmond, OK, Tanner and wife Erin Cunningham of Oklahoma City, Drew Cunningham and fiancée Ashley Murray of Alva, and Walter Cole Cunningham of Kansas. She is also survived by five great grandchildren, Jayden, Cloey and Lenyx Cunningham of Edmond and Brooklyn and Zane Zimmerman of Alva, other relatives and many friends. Vera was preceded in death by her husband Chet Straw, sons Walter and Randy, and precious granddaughter Allison Zimmerman. Family graveside services will be in Cherokee, Oklahoma.

Vera Nadine Straw, 98, passed peacefully of natural causes at the Share Convalescent Home on Tuesday, February 2, 2021. Vera was born on October 25, 1922, in Wichita, Kansas, to Weldon Peoples and Evelyn Rickman. She was raised by her grandparents,... View Obituary & Service Information

The family of Vera Nadine Straw created this Life Tributes page to make it easy to share your memories.

Send flowers to the Straw family.