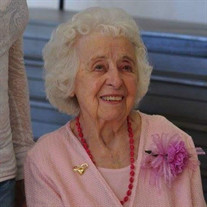 Funeral services for Verna Ellen Woolley will be 2:30 p.m. Monday, February 13, 2017, at the Waynoka Church of God with Pastor Ken Higgins officiating. Interment will be in the Waynoka Municipal Cemetery under the direction of Marshall Funeral Home of Waynoka. Verna Ellen Woolley was born November 4, 1920, to Walter and Martha (Walker) Fiscus at Waynoka and passed away February 9, 2017, at Alva at the age of 96 years, 3 months, and 5 days. Verna was raised northwest of Waynoka in Woods county with her three brothers and three sisters. She attended rural schools and also Waynoka High School. On November 27, 1935, she was united in marriage to Bert Woolley at Alva. They had three children, Beverly Ann, Rick Lynn, and Joleta Jean. In November of 1946 she gave her heart to the Lord and she lived a christian life, attending the Church of God. She was a Sunday school teacher for many years and worked in the missions ministries and served on different church committees. In 1960, she moved with her family from the farm to her current home in Waynoka. She worked at the E.P. Clapper Memorial Hospital and the Waynoka Nursing Home for 30 years. Besides her parents , she was preceded in death by her husband, Bert, one daughter, Beverly Lyon, two sons in law, Grover Lyon and Kermit Criswell, three grandsons, Spencer Austin, Nathan and Ross Lyon, her three brothers, and her three sisters. Verna is survived by one son, Rick Woolley of Alva; one daughter, Joleta Criswell of Waynoka; nine grandchildren, Kerri Truesdale and husband, Wes, Linda Seiger and husband, David, Stan Lyon, Don Woolley and wife, Paula, all of Waynoka, Michelle Nally and husband, Rudy, of Pierceville, Kansas, Melissa Harzman and husband, Lance, of Alva, Mike Whipple and wife, Debbie, of Levelland, Texas, and Jackie Seiger and husband, Fred, of Waynoka; twenty great grandchildren, twenty four great great grandchildren, other relatives and many friends. Memorial contributions may be made through the funeral home to Children of Hope.

Funeral services for Verna Ellen Woolley will be 2:30 p.m. Monday, February 13, 2017, at the Waynoka Church of God with Pastor Ken Higgins officiating. Interment will be in the Waynoka Municipal Cemetery under the direction of Marshall Funeral... View Obituary & Service Information

The family of Verna E. Woolley created this Life Tributes page to make it easy to share your memories.

Funeral services for Verna Ellen Woolley will be 2:30 p.m. Monday,...