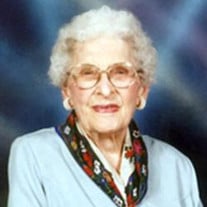 Funeral services for Viola Maudell Wilson, 101, will be 10:00 a.m. Thursday September 7, 2006, at the Waynoka First Baptist Church with Pastor David Shaw officiating. Interment will be in the Lakin, Kansas Cemetery under the direction of Marshall Funeral Home of Waynoka, LLC. Viola Maudell Wilson, daughter of the late William Jason and Texanna (McAdoo) Lewis, was born June 5, 1905, near Gorman, Texas, and passed away September 2, 2006, at Enid, Oklahoma, at the age of 101 years, 2 months, and 28 days. Viola graduated from Gorman High School and Lippert Business School. She then moved to Guymon, Oklahoma where she worked for R. J. Keller Real Estate. It was there that she met James Bevly "J. B.? Wilson and they were married on June 6, 1934 in Plainview, Texas. After a few years, they moved to Garden City, then to Lakin, Kansas, where she owned and operated the Lakin Gift Nook for 35 years until she retired. After living in Lakin for 50 years, Viola moved to Waynoka, Oklahoma, to be near her son, Bill and daughter-in-law, Beth. Viola was baptized into the Baptist Church in Bass Lake near Gorman, Texas in 1917. While living in Lakin, Viola was an active member of the First Baptist Church, where she was Church Clerk and Sunday School Teacher for a number of years. She was a member of several civic clubs, including Civic Study Club, Golder Agers, and the Neighborhood Coffee Club. Viola had a natural talent for needle work, such as knitting, crocheting, and quilting, which she did until arthritis set in at age 95. She also enjoyed cooking, traveling, and playing games. Viola has always been an inspiration to all who have met her. She was an amazing lady displaying a great deal of wisdom. Besides her parents, she was preceded in death by her husband, J. B.; three brothers, Vernon, Dale, and Clarence Lewis; and one sister Edith Bray. Viola is survived by one son, Bill, and his wife, Beth, of Waynoka; two grandchildren, Kent Wilson and his wife, Joy, of Terrell, Texas, and Julie Bray and her husband, Ricky, of Yukon, Oklahoma; one brother, Gene Lewis, of Plainview, Texas; four step-grandchildren, Jerry Florence and his wife, Olivia, of Bay Point, California, Kathy Alonzo and her husband, Javier, of Los Angeles, California, Janet Florence of San Ramon, California, and Stacey Solis and her husband, Robert, of Los Angeles, California; 3 great grandchildren; 7 step great grandchildren; other relatives and friends. Memorial contributions may be made through the funeral home to the Waynoka Nursing Home.

Funeral services for Viola Maudell Wilson, 101, will be 10:00 a.m. Thursday September 7, 2006, at the Waynoka First Baptist Church with Pastor David Shaw officiating. Interment will be in the Lakin, Kansas Cemetery under the direction of Marshall... View Obituary & Service Information

The family of Viola Wilson created this Life Tributes page to make it easy to share your memories.