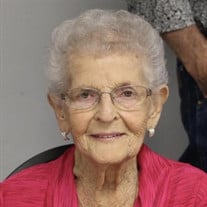 Graveside services for Virginia Phillips will be 2:00 pm Wednesday, December 9, 2020, at the Pleasant Ridge Cemetery southwest of Aline with Rev. Polly Young officiating. Arrangements are under the direction of Wentworth Mortuary, LLC. Masks will be required with social distancing and feel free to bring a lawn chair. The service will be livestreamed on Marshall Funeral Home Facebook page. Virginia R. Phillips, daughter and oldest of seven chilren of the late Lindley and Zoa (Martin) Kirkendall, was born September 22, 1928, on her grandparents farm in Major County, and passed away December 5, 2020, at Fairview, at the age of 92 years, 2 months, and 13 days. Virginia attended 8 years of school at Ruby School and then to Aline High School where she graduated in May 1946. On March 23, 1946, she was united in marriage to Freddie Calhoun. They were the parents of Tonita Sue and Douglas Laroy. Freddie served in the navy from January 1946 until November 1947. He went to work for the City of Cherokee as an electrician. He was electricuted in June of 1949. Virginia, Toni, and Doug lived with her grandparents for several months. On May 4, 1952, she married Clair Phillips and they lived in the Aline area and later moving west of Aline where they farmed. Clair adopted Toni and Doug in 1963. They were the parents of four more children, Jerry Don and Brenda Jo, both died at birth, and Perry Dan was born in 1958 and Robby Scott in 1961. Clair, Virginia and their children were active members of Aline Christian Church. She was a member of CWF and very active in community activities. She enjoyed farming with her husband and was an accomplished seamstress. She also enjoyed embroidery. Besides her parents and husbands, Freddie Calhoun and Clair Phillips, she was preceded in death by three children, Jerry, Brenda, and Perry; three brothers, Bobby Kirkendall, Charles Kirkendall, and David Kirkendall; and one sister, Mary Spence. She is survived by her daughter, Toni Munn of Enid; two sons, Douglas Phillips and wife, Dianne, of Aline, and Rob and wife, Jackie, of Cleo Springs; her grandchildren, Rebbecca Perez and husband, Candy, Matt Phillips and wife, Monica, Kelly Nech and husband, Chad, Nicole Ekberg and husband, Sean, Marcia Reeves and husband, Curtis, and Laci Dalton and fiancé, Aaron Rigg; great grandchildren, Brock Phillips, Taylor Phillips, Connor Dickey, Samantha Phillips, Damion Fredrick, Katlin Fredrick, Katie, Jacob, and Isaac Reeves, and Elizabeth Dalton; and one great great grandchild, Aspen Phillips. Also surviving are sisters, Carolyn Dietz and husband, Mickey, and Betty Garinger; many nieces and nephews, other relatives and friends. Memorial contributions may be made through the mortuary to Aline Christian Church or Pleasant Ridge Cemetery.

The family of Virginia R. Phillips created this Life Tributes page to make it easy to share your memories.

Graveside services for Virginia Phillips will be 2:00 pm Wednesday,...

Send flowers to the Phillips family.