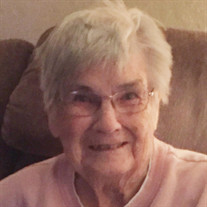 Funeral services for Virginia June Wright will be 11:00 a.m. Thursday, February 13, 2020, at the Elm and Murrow Church of Christ with Scott Kysar officiating. Interment will be in the Waynoka Municipal Cemetery under the direction of Marshall Funeral Home of Waynoka, LLC. Virginia June Wright, daughter of the late George Franklin and Edna Ruth (Whitcomb) Ellis, was born August 31, 1927, in Waynoka, Oklahoma, and passed away February 9, 2020, in Athens, Texas, at the age of 92 years, 5 months, and 8 days. Virginia graduated from Waynoka High School. On August 31, 1945, she was united in marriage to Joseph Franklin Wright, which happened to be on her 18th birthday. They followed his job on the railroad and lived in several places. While living in Perryton, Texas, she cooked at the hospital. They moved to Alvarado, Texas, and then to Blanchard, Oklahoma, to live with Ellis and Susan. About 7 months ago, she moved to Athens, Texas, to be near her daughter, Nancy. She was a member of the Waynoka Methodist Church and attended a non denominational church in Alvarado. She loved camping and fishing, and enjoyed working at the food bank that she and Frank established 27 years ago. Besides her parents, she was preceded in death by her husband, Frank; one daughter, Karon Wright; one brother, Charles Ellis; and three sisters, Yvonne Dodge, Dorothy Roach, and Joyce Redgate. Virginia is survived by two sons, Ellis Wright and wife, Susan, of Blanchard, and Kevin Wright and wife, Sherry, of Fort Worth, Texas; one daughter, Nancy Horton of Athens, Texas; one sister, Jeannie Kysar; 9 grandchildren; 17 great-grandchildren; 3 great-great-grandchildren; other relatives and friends. Memorial contributions may be made through the funeral home to the New Life Ministry.

Funeral services for Virginia June Wright will be 11:00 a.m. Thursday, February 13, 2020, at the Elm and Murrow Church of Christ with Scott Kysar officiating. Interment will be in the Waynoka Municipal Cemetery under the direction of Marshall... View Obituary & Service Information

The family of Virginia June Wright created this Life Tributes page to make it easy to share your memories.

Send flowers to the Wright family.