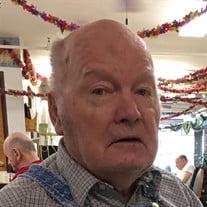 Memorial services for Walter Burkes will be 2:00 p.m., Saturday, March 9, 2019, at the Carmen Christian Church with Rev. Kirk Board officiating. Cremation arrangements are under the direction of Wentworth Mortuary, LLC. Walter Gene Burkes, son of the late J.B. and Helen Mae (Brown) Burkes, was born November 24, 1925, at Carmen, and passed away February 28, 2019, at Alva, at the age of 93 years, 3 months, and 4 days. Walter attended school at Dacoma before joining the U.S. Navy. He served during World War II. In September of 1955, he was united in marriage to Phyllis Jean Fowler. They made their home in Carmen where they raised their family. He was a member of the Masons, the I.O.O.F, and the American Legion. Walter was a retired rural mail carrier and was a 54 year member of the Odd Fellows and a 55 year member of the Masons. He enjoyed playing cards and dominoes. Besides his parents, Walter was preceded in death by his wife, Phyllis; one brother, Charles Burkes; and one sister, Helen Faye Gill. Walter is survived by his children, Mark Burkes and his wife, Anne, of Alva, Barbara Sacket and her husband, Billy Jr., of Aline, Judy Elliott and her husband, Mike, of Cleo Springs, and Phillip Burkes and his wife, Paula, of Helena; one sister, Edna Niles of Oklahoma City. Also surviving are grandchildren, Michael Sacket and his wife, Lori, of Aline, Jeremy Sacket and his wife, Theresa, of Ponca City, Sherry Hofen and her husband, Scott, of Jet, Justin Elliott of Enid, Christopher Elliott and his wife, Misty, of Fairview, Cody Elliott and his wife, SamieJo, of Cleo Springs, Ty Burkes of Helena, Teague Burkes and his wife, Jessi, of Helena, and Craig Winters and Stacey of Attica, Kansas, and Nicholas Burkes of Alva; great grandchildren, Creighton, Wyatt, and Silas Hofen, Dallin, Lillian, and Owen Sacket, Gwyneth and Garrett Sacket, Kolby, Lauren, and Katelynn Elliott, Camryn and Sofie Elliott, Blakely Riggs, Henry and Lincoln Burkes, Maddie Winters, Haylee, Haden, and Heath Elliott; sister-in-law, Nina Burkes of Carmen; other relatives and friends. Memorial contributions may be made through the funeral home to Beadles Nursing Home.

The family of Walter Gene Burkes created this Life Tributes page to make it easy to share your memories.

Memorial services for Walter Burkes will be 2:00 p.m., Saturday,...

Send flowers to the Burkes family.